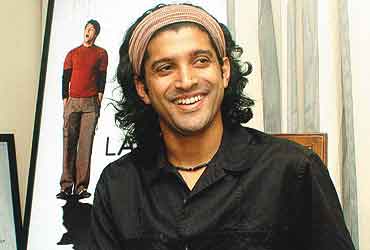 Such a collective weight of anticipation can kill any spark of confidence in a filmmaker. However, Farhan looks far from burdened, in fact, he is the epitome of fashionable indifference even while admitting that he is "anxious, nervous" but not a wee bit more than he was with his maiden venture. Clearly, DCH ghosts don’t haunt him. "It (DCH) gave me a great platform and gave others the confidence to work with Excel Entertainment (the production house he runs with childhood friend Ritesh Sidhwani)," says Farhan. However, DCH is already a thing of the past for the duo. Cut to the new: Lakshya has been made at twice the cost and sold at double the price. Still, Farhan can afford to look unperturbed, laidback and so awfully cool.

Prod him a bit more and he acknowledges that Lakshya does mark some radical departures from DCH. Although it does give as much importance to voguish haircuts (Hrithik dons three distinct hairpieces, Preity makes do with two). DCH was Farhan’s own story, it was about his friendships and associations. Lakshya is his dad, Javed Akhtar’s script, it does have a GenNow hero and it is also, in a way, about coming of age. Not in love and friendship but in life, not in Bombay-Goa-Sydney but at 18,000 feet above sea level, in a place called Kargil. "It required a distinct treatment but its feel is very close to that of my own generation," says Farhan. That was the reason why he picked the script: because he could connect with it and not because it happened to be the script his dad had written after a long hiatus of almost 12 years (the last film Javed penned was the AB-starrer, Main Azaad Hoon). For Javed, the collaboration has been based on mutual respect. "Creativity is paradoxical. You need commonality of aesthetics as well as differences to make it exciting," he says.