Just too long to suffer, even as a brainless nod to old-style formulaic cinema. 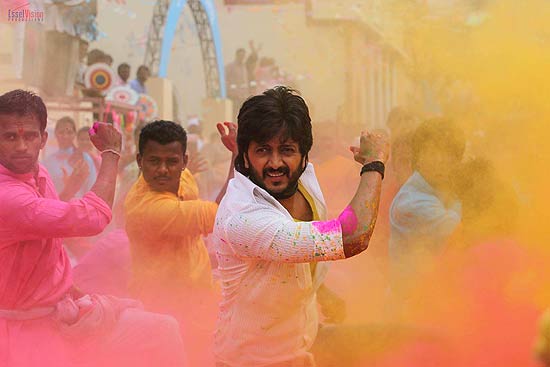 Sajid Nadiadwala is credited with the story of Nishikant Kamat’s Ram Lakhan-Karan Arjun redux about evil landlords, brothers separated at birth and vengeful mothers goading their sons on. In a screenplay devoid of surprises, you’re left counting the number of times Riteish Deshmukh struts on screen in slow motion, before pounding the villain’s (Sharad Kelkar) men with bricks. Tanvi Azmi gets possibly the biggest role of her career as the teary wife who walks to Pandharpur so she may become a ‘complete’ woman by bearing a child. Vitthal obliges her with two, one of whom she promises to put at the Lord’s feet, throwing logic and reason out of the picture. The heroines (Radhika Apte, Aditi Pohankar) are decorative and commodified—at one point Deshmukh refers to them as TV and washing machine respecti­vely on an exchange in the villain’s den, thereby belabouring the point. Instead of an item number you have Salman Khan giving rel­­ationship advice. At 158 minutes, Lai Bhaari is just too long to suffer, even as a brainless nod to old-style formulaic cinema.