Pressure builds up amid a thick security cover before the first Test. And, of course, the big question about Ganguly. Updates 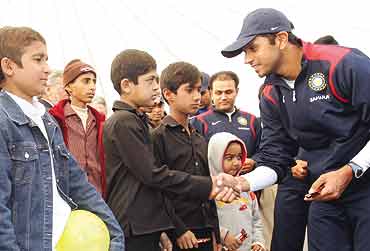 "Can you guys move around freely?" India captain Rahul Dravid asked a couple of journalists, including this correspondent, who dropped in to greet him on his 33rd birthday and wish him luck. Typical of a man known to prepare himself for every contingency, Dravid has insured himself against boredom by getting his wife Vijetha and three-month-old son Samit to travel with him to Lahore. And yet, the envy in his voice was palpable when he bounced the question.

The last tour in 2004 came after a long gap, and in the wake of intense political activity on both sides of the border. But by the time the Test match was played in Lahore, the Indian cricketers had been in Pakistan for a while and had found time to look around. This time around, the Lahore experience is turning out to be different. The team has been in Pakistan for just over a week and has had to put shopping and sight-seeing on hold. Barring a 45-minute visit on Wednesday to the Shaukat Khanum Memorial Cancer Hospital run by former Pakistan captain Imran Khan, there have been no major social engagements for the team. Of course, Harbhajan Singh, Yuvraj Singh and Gautam Gambhir did make their way to Gurudwara Nankana Sahib on Tuesday, a day after the Indians drew their tour opener with Pakistan A.