International Lady With The Poison Flowers

Lady With The Poison Flowers

With Rajiv Gandhi's gruesome assassination, the suicide bomber had well and truly arrived 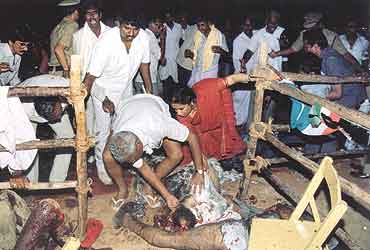 Dhanu was a member of the LTTE's suicide squad, Black Tigers. Very little is known about her, except that she was an extraordinarily motivated woman and carried out two dry runs during public meetings before targeting then PM Rajiv Gandhi at an election rally in Sriperumbudur.

She was part of a nine-member unit, with a back-up bomber, Subha. When the unit arrived in India, Dhanu brought herself thick glasses for disguise and mostly kept indoors to avoid arousing suspicion. The reason: she believed her unmistakable Jaffna accent would give her away. The night before she assassinated Gandhi, she watched a movie—and had an ice-cream before reaching the venue of her suicide bombing.