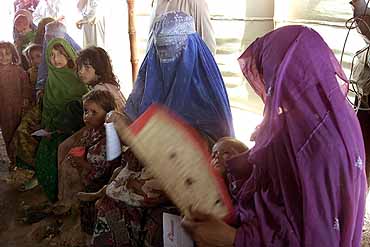 outlookindia.com
-0001-11-30T00:00:00+05:53
When the world's most handsome cricketer, Imran Khan, suddenly decided to marry Jemima Goldsmith, British newspapers thought his choice was the cultural equivalent of the lethal reverse swing the fiery Pathan had mastered in his heyday. For, not only did the callow daughter of a Jewish billionaire find Imran irresistible, she even converted to Islam and agreed to forsake the bohemian, freewheeling London life for the sequestered and suffocating 'feudal society' of Pakistan. No booze, no nightclubs, no late night parties, shrieked the tabloids in gratuitous advice, believing the innocent 21-year-old needed to be reminded of more abiding joys of life other than love.

Five years and two children later, Jemima continues to be the enigma she once was for British media, tailed doggedly for canning extensive TV footage on her humanitarian work—supplying tents and food in the Afghan refugee camps in Peshawar. For them, Jemima the renegade could well now become Jemima the charitable—a hip, 21st century post-modernist version of Mother Teresa, leaving the wealthy West to provide succour to the wretched of the East.

But such vacuous media obsession, and the heated debate on the worldwide web about her intention, can't detract from the commendable, perhaps gutsy, decision to step into Afghan refugee camps at a time when most politicians think they are not worth the investment. Even the Pakistan military regime has refused to register them and wouldn't dither to push them back across the border. No wonder the now-familiar image of Jemima Imran Khan, dressed in salwar-kameez, her tousled golden hair peeping out from the dupatta draped around her head, standing amidst emaciated children and their forlorn mothers, has become so inspiring and awesome.

Says Jemima, now a resident of the posh E-7 area of Islamabad: "Unfortunately, sympathy for these Afghans is on the wane and it is not politically correct these days to be seen helping them. But you have to understand that it's not only the war that sees them here. The continuing drought has also affected their lives." Her reticence bordering on shyness, and the fact that she is conscious her statements could be used against her politician-husband, perhaps explains her muted criticism.

The Afghan cause was discovered inadvertently. A friend took her to the refugee camps and the lady from London was appalled at the sordid condition they lived in. Recalls Jemima: "The conditions at these camps are deplorable and instead of sitting and doing nothing, I decided to help them. Last winter, so many babies died of the cold. People are hungry—they have no food, no shelter, and are extremely insecure that they might be turned back into Afghanistan."

But the charity work is no passing whimsiness, no distraction from the monotony of life. She will be there for the suffering Afghans until some tangible alternative is worked out. Says she: "Till the time the Pakistan government and the United Nations High Commission for Refugees (unhcr) come to some kind of an agreement, I will continue to help them." The determination in her voice simply can't be missed. Perhaps it was this quality which saw Jemima battle the administrative authorities who attempted to callously stonewall her efforts in Peshawar's Jalozi camp.

But nothing in Pakistan, not even attempts to save lives, is untouched by politics. Her candour is touching as she points out: "I think the reason they finally agreed was because of the foreign television crew members covering the event". But beyond the politics is also the palpable fear that a million refugees could well merge into the Pakistani population. And Jemima quite understands this. Explains she: "They (authorities) see these tents as something which will give acceptance to these refugees. The landlords also protest because they fear this (a comfortable camp) could encourage more to come... But wherever I go, the first thing that I am asked for is a tent. I dread the coming monsoons for these people without a shelter."

Obviously, Jemima has some experience in charity work. It's an instinct with the British upper classes. And then, she's also been helping Imran at his Shaukat Khanum Cancer Memorial Hospital in Lahore—it was she who had lured Lady Diana to visit the hospital for raising funds. She's buzzing with ideas: "I will soon be organising a fund-raising dinner for this." Sponsoring lavish feasts to assist the suffering isn't still a Third World norm, but help wrapped in a particular outlook is as good as any—and decidedly better than none at all.

The extremely good foreign press she has been getting is sweet recompense for Jemima who found herself pilloried for an article she wrote on the Palestinian issue last November. Titled Tell the truth about Israel, she began the piece famously: "Generally, I am sceptical about conspiracy theories. However, I feel the current furore in the Muslim world about western media coverage of events in the Middle East is justified." She then ripped into Al Gore and George Bush for playing to the powerful Jewish lobby in their election campaigns, and didn't even spare Hillary Clinton's doublespeak on the issue.

For the West to have someone of their own criticise them vehemently seemed an abject betrayal. Articles and letters against Jemima flooded newspaper offices. And one of her family lawyers refused to work for her because of her pro-Palestinian sentiments. But the lady remains unfazed: "The press did not get it right. The lawyer was certainly not close to me and he went public because I think he wanted self-projection. But on my sentiments about the Palestinians, well, different people have reacted in different ways. The problem here is that Zionism is linked with Jews. But then, not all Jews are violent."

It's been a tightrope walk for Jemima. The language press in Pakistan remains opposed to her because of her Jewish background. The liberals believe the desire to prove her Islamic credentials has transformed her into a Muslim radical. But the lady simply laughs at it and says: "Yes, I have to laugh at this. There's a great willingness to label people. For me, Islam, or any other religion, is very simple. For me, it is not so much the rituals of any religion, but whether or not you are doing a good deed, whether or not one is a good human being."

But such humanistic interpretation of religion leaves the hotheads cold. And they are always eagerly looking for an opportunity to run down her Muslimness. Last winter, for instance, a photograph of her in a concert showed her wearing a skimpy blouse, much to the embarrassment of her husband's party workers—and, obviously, to the delight of his opponents. Perhaps changing culture isn't quite as easy as getting into a kameez.

But Jemima has now lived in Pakistan long enough to not give a damn about the carping critics. "Frankly, I don't stop getting amazed at these kind of allegations. It is more a political reaction than anything else.After all, you see women wearing saris with short blouses. And that's acceptable. I remember at this concert I was wearing a long black overcoat and pants. It was the angle from which the photograph was taken that gave the impression of a short blouse," she defends herself. But for the harried Afghans in the refugee camps, however, Jemima Imran Khan from all angles is a help they could have more of.

'Science Too Can Bring You Fame'