Kraits In The Grass

In Pakistan too, the foreign hand story meets with scorn 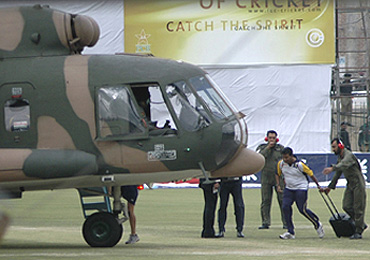 Although some of the players were injured, their courageous driver, Mahar Mohammed Khalil, managed to save their lives by stepping on the accelerator and steering the bus to safety. He also saved Pakistan from deep embarrassment. "Thank God," says Khalil, "the rocket they fired at the bus missed its target. The next moment, a man came out of a white car and threw two hand-grenades, which also did not explode. Then another man came out of the car and opened fire at us." (Police sources claim the rocket was actually aimed at an escort vehicle, not the bus carrying the players.) Khalil heard the Pakistani liaison officer to the Lankan team shout at him to flee. "It was as if I got a 400-volt jolt. We made for Qaddafi stadium and it was only there I found out that some players had been injured." In all, six Lankan players were hurt, eight security personnel died.

As the attack grabbed top slot on news channels, the pundits were quick to point out similarities between the Lahore and Mumbai attacks—an armed group swooping on chosen targets with chilling ruthlessness. But Lahore differed from Mumbai in one major respect—not one assailant was killed or caught. In the absence of a Kasab, there was breathless speculation on who could have masterminded the attack on the Lankan team. From India’s Research & Analysis Wing (RAW) to Kashmiri militant groups, Lankan-Tamil avengers to Al Qaeda-Taliban elements, even sections in government allegedly trying to divert attention from a protest march lawyers were taking out against President Asif Zardari—the possibilities were discussed threadbare. Also speculated on, in whispers, was the involvement of the Lashkar-e-Toiba (LeT), which is reported to be furious with the government over the pressure it has come under post-Mumbai.