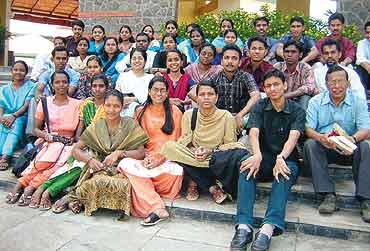 In six batches till 2005, a total of 208 Dalit and Adivasi students have passed out of CEx. Of these, 37 have opted for higher studies, 34 have found employment, accounting for a 35 per cent success rate. Some students, such as K.R. Dilraj, have successfully taken the CAT and procured an MBA from IIM, Kozhikode. "Before joining CEx, Dilraj was a court clerk. Today, he earns Rs 8 lakh per annum as bank assurance manager with ICICI Lombard Insurance in Hyderabad," says Nampoothiri. ICICI Lombard recruited Dilraj not because he was an Adivasi. He was just good for the job. CEx believes merit is nothing but the availability of opportunity.

An opportunity M.M. Risha of Kozhikode also availed of. She came to CEx in July 2003 with a BTech in Electronics and Communications besides 18 months of experience as lecturer. After the CEx diploma, she completed her MTech and is now systems analyst with Deloitte Touche Tohmatsu in Hyderabad. Her salary of Rs 2.7 lakh per annum may pale in comparison to what IIM toppers get, but factor this: she's the first graduate in her family. "My mother teaches preschool, and father works as a coolie," she says. She acknowledges the significance of CEx in her development: "What we acquired there was not just technical knowledge. We were equipped with analytical skills, ability to interact in discussions and given a booster dose of self-confidence. Crucially, I felt comfortable being with other Dalit-Adivasi students."