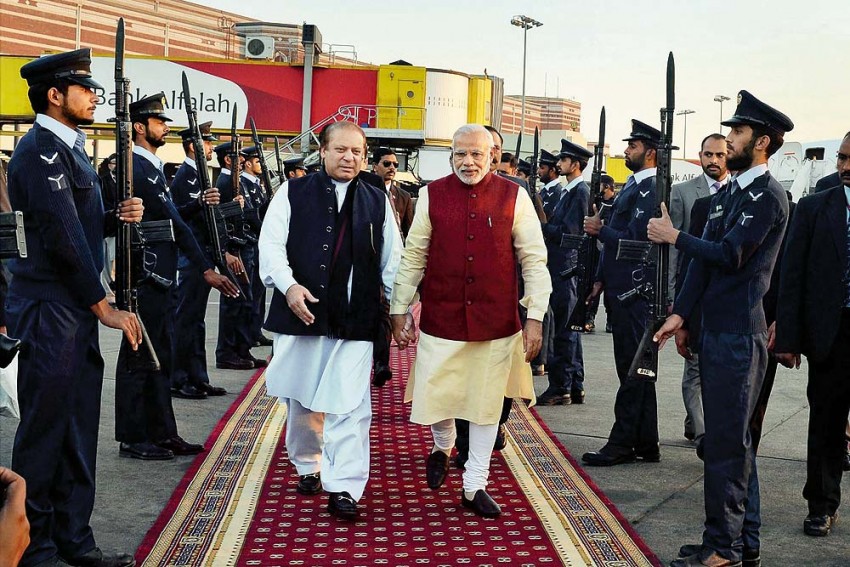 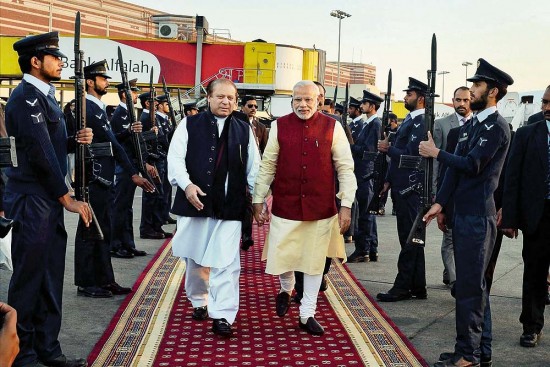 The moment Narendra Modi landed in Lahore, certain quarters began to feel a bit uneasy. One was almost sure that the goodwill initiative would get derailed. The only question was when. And then Pathankot happened. Relief followed. The India-Pakistan peace plan had confirmed itself into a flop film—a script of tension interrupted by a peace initiative that is soon interrupted by violence.

And this particular instance of violence may have increased India’s vulnerability, as the architects have now learnt a few things about how Indian security handles such crises. Jihadi outfits such as the Lashkar-e-Taiba are already making fun of Indian security processes. If, as news reports say, the Indian intelligence could pick up details of alleged meetings bet­ween Jaish-e-Muhammad (JeM) militants and the ISI, then why couldn’t it stop the attack?

The harsh truth is that while Narendra Modi and Nawaz Sharif may be sincere in negotiating peace, it is not enough. In fact, not strengthening their defences would be to neglect the protection of the very initiative. Of course, the answer is not in upping the ante and “calling Pakistan’s nuclear bluff,” as some speakers suggested at a counter-terrorism conference in Jaipur last year, but in making it clear that the defences are impregnable.

The attack puts Pakistan prime minister Nawaz Sharif in an unenviable position as he will be under greater pressure to deliver on his promise to take “prompt and decisive action” against perpetrators of the recent acts of violence. The assumption here is that it will all be conveniently traced to some place in Pakistan. The Indian media is so sure about this entire incident landing on Pakistan’s army headquarters or ISI’s table that no one is even ready to question gaps in what that narrative offers. From the perspective of most of India’s security community, the answers are obvious and not worth any further questions. So, there is little point for them in even exploring the logic or  the illogic of Pakistan’s army derailing the process so soon after Modi’s visit. After all, there was no whiff of Sharif immediately signing anything off.

In Islamabad a lot of confusion comes from the increasing unpredictability of Sharif’s status within the strategic centre. Is he the man making the decisions? Does he continue to be a lone operator as far as the peace initiative is concerned? No one really knows.

Yet, it is no secret that, like most politicians in Pakistan, Sharif is invested in peace with India. He made a peace initiative so central to his post-election plan that even his internal team was worried. They were of the idea that he shouldn’t have announced it before taking oath in 2013. Reportedly, his young and energetic commerce minister, Khurram Dastagir Khan, was reprimanded for going too fast in bolstering trade ties. It is believed that despite Sharif’s continued faith in improving bilateral ties, he has lost his overall steam after Imran Khan’s sit-in from August to December 2014. It seems odd for Sharif to have then offered a major initiative to Narendra Modi at Ufa by signing on to a joint statement that focused on terrorism only. Subsequently, his foreign relations advisor Sartaj Aziz had to do a lot of explaining about why the statement did not visibly talk about Kashmir. Later, we saw the NSA-level talks being cancelled. To me, the Ufa meeting and afterwards looked like a Kargil in which prime minister Nawaz Sharif was thoroughly embarrassed. The media, a bulk of which, like its Indian counterpart, supports a statist perspective, hounded Sharif and accused him of appeasing Modi at the cost of national interests. Sharif is certainly not stupid enough to repeat such action. In any case, after July/August 2015, there was little space for Pakistan’s prime minister because New Delhi was upset and not willing to talk.

After that, something seems to have changed on both sides, which many believe is due to prodding from Washington. The extremely popular and populist army chief, General Raheel Sharif, was on board as far as Modi’s visit to Lahore was concerned. Although it was made to look like a surprise visit, the envoys had done some rounds prior to the visit. The very fact that Imran Khan visited Delhi and met Modi before the visit, signalled the military establishment’s willingness to talk. This is not to suggest that Raheel Sharif, who holds  the real power, has yet fully signed on to the larger peace plan. For Pakistan’s military, the Indian state remains the key threat. India, it suspects, would try to damage Pakistan as it had done in 1971. In fact, some of the latest videos released by military circles hold the Indian RAW responsible for planning the tragic killing of 140 school children in Peshawar in December 2014 just like it has previously hurt Pakistan by supporting the Mukti Bahni, something blithely admitted by Narendra Modi during his Dhaka visit. Consequently, in recent months, relations between Islamabad and Dhaka have nose-dived over the issue of hanging of Jamaat-e-Islami leaders in Bangladesh.

Therefore, with the aura of potential threat from India, the ability of even General Sharif in turning relations around within a short duration is impossible. He will have to start a conversation within his military and begin to change the organisational narrative. But this raises the question of whether or not he himself was in a hurry to upset the peace initiative even before it took off. It could also be that elements within his organisation or the ISI have taken the initiative, if it is proven that the perpetrators came from Pakistan. The other day, the Pakistani columnist Gul Bukhari questioned General Sharif’s capacity to tame the ISI and keep it in line, almost suggesting that elements in the premier intelligence agency may have a mind of their own. And certainly this is not a scenario which can be ruled out easily, but that also puts tremendous pressure on Rawalpindi to demonstrate that it can control such elements. That some jehadi organisations like the JeM and the LeT/JuD networks operate quite freely in the country raises doubts about Islamabad’s willingness and perhaps, going a step further, even its capacity, to control militancy.

Indeed, if the probe lands at the JeM’s doors, one has to wonder whether this was entirely the doing of rogue elements within the security establishment. Jaish is now more intact and organised than it used to be during the previous decade. Jaish and its leader, Masood Azhar, have managed to keep their heads under water for long, which does not cancel out a possible craving for attention and action. If anything, it makes it more likely. Azhar’s decision to address a gathering in Peshawar on Afzal Guru’s death anniversary last year indicated it. But its capacity to go its own way is highly questionable, although it has remained unharmed and unflustered even after December 2014, when everyone else (with the exception of LeT/JuD) was put on a very tight leash and even punished.

A probe into the matter is not likely to be easy, certainly not one easy enough for the political government to resolve. Nawaz Sharif must put the newly appointed NSA, Lt. General Nasir Khan Janjua, centrestage. If resolving matters with India is central to the military, it should be brought into the conversation and given responsibility instead of the politicians saving face all the time. But more importantly, the peace talks ought to be pushed backstage. The Modi visit was a pleasant development in that was welcomed in Pakistan. However, leadership on both sides need to realise that peace initiatives often paradoxically set off violence. The talks will have to be conducted patiently and slowly, and perhaps now is not their time.

(Islamabad-based Ayesha Siddiqa is a leading strategic thinker of Pakistan and the author of The Military Inc: Inside Pakistan’s Military Economy)

In addition to jeopardising the budding steps towards long-term peace initiatives between India and Pakist  an, the Pathankot attacks have also resulted in loss of life, panic and a climate of extreme vigilance. The Hindon air force base, Mumbai airport and Madurai airport have all seen increased security. An unclaimed mobile phone in Mumbai airport had also led to a Turkish Airlines flight being asked to postpone its landing.