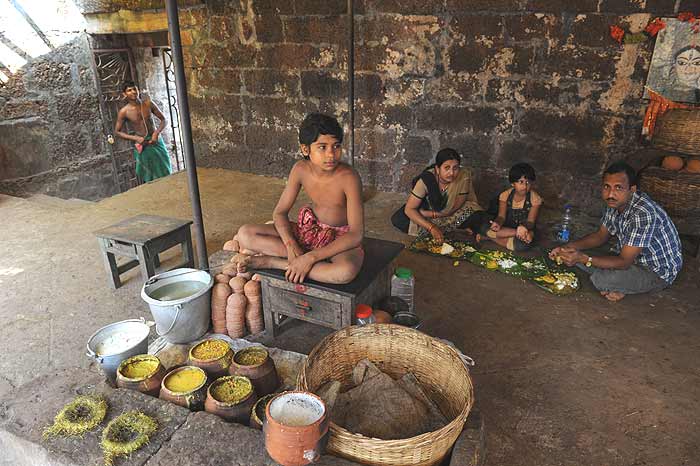 India often comes to me as large clots of culture-cuisine-literature held together by a gauzy cling film that is four parts Bollywood-cricket and one part magic. This view was bolstered on a recent December morning as I ate chakuli-ghugni at a busy breakfast stall near Bhubaneswar’s ancient Lingaraja temple. I had just taken a 45-minute flight from Calcutta and couldn’t shake the feeling that I had arrived at a different country. Chakuli, a crepe made of rice and urad dal, is a perfect foil for the spunk of the yellow-pea curry that is ghugni. It is therefore a favourite savoury street breakfast all over Orissa, all year long. Pop into neighbouring Bengal and you’ll find chakli, made of rice and moong dal, but only in traditional kitchens and never savoury. Much of the year you won’t find it at all, because Bengal’s chakli is entirely a wintry indulgence. It is eaten sweet, drizzled with nolen gur—date palm sap cooked down to an aromatic sludge whose bouquet blooms as winter deepens.

And it wasn’t just the chakuli, of course. The brief drive into Bhubaneswar from the airport was a blur of elaborately carved Kalinga-style spires of the city’s numerous temples—800, 1,000, 1,200 years old. There were walls of dressed ochre sandstone, covered with tribal stick-figure art in white. Vandalising this in places were posters in Oriya, with its very Dravidian-looking rounded script. I had come less than 500 km and the country had changed. This dense heterogeneity never fails to warm my cockles and to better explore its contours I was going to drive back the distance I had just flown. 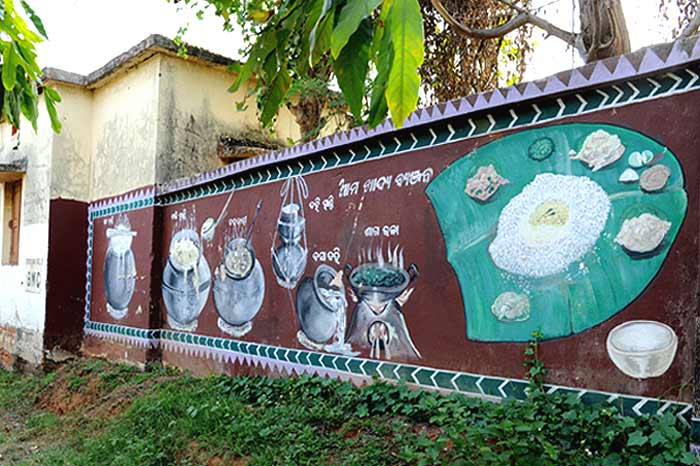 My driver, Shibu, happened be an inveterate foodie—not an uncommon affliction in this part of the country. En route to the chakuli stall he had regaled me with stories of fish he has cooked with cashew paste. And now, at 9 am, he was already describing the mutton I was to eat for lunch. But we had important business to attend first: rasogolla. In the Utkal-Banga region, folks can get their knickers in a knot over the origin of rasogolla. If you asked me, I’d say it’s fairly obvious that the Oriya rasogolla birthed the Bengali, but this debate on its origins interests me not at all. My interest lies squarely in the taste. And for that, Shibu was taking me to Pahala, 15 km outside Bhubaneswar on the road to Cuttack.

With over 80 stalls clustered on either side of NH5, Pahala is the world’s only rasogolla market. The stalls looked identical: a row of vats with rasogollas of increasing size swimming in syrup. As each car got off the highway, the vendors theatrically waved their perforated cooking/serving spoons. I quickly popped a few samples. The flavour was coy with a subtle lift from cardamom, and the grains seem to dissolve without much of a chew. This was excellent rasogolla, quite different from good Bengali rasogolla, which is toothsome and has dominant milk notes. I promptly bought two dozen to bring back. That they were later declared dead on arrival hurt. But then, I am happy when good food doesn’t travel well and forces one to visit.

Shortly before Cuttack, Shibu stopped at a shack of bamboo and thatch that buzzed like a bee hive. This was the promised mutton-mecca, and it was peak lunch hour. But most people were not eating in; there wasn’t enough room. Devendra Mohanty had just scored his hit and was gunning his scooter to get out when we spoke. He has been a regular since 1980. “Occasionally the police come and tear down the shack, so they rebuild it a few feet away. But the mutton stays the same.” 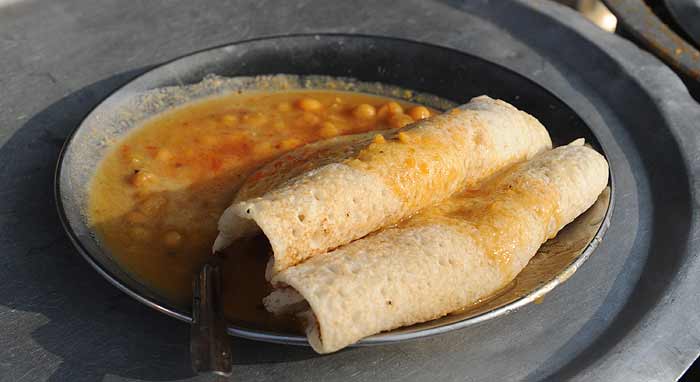 We squeezed in on an already loaded rickety bench, and were immediately served: short-grained local rice on a sal-leaf plate and mutton in a sal-leaf bowl. The meat itself was exquisitely silky, bits of fat bobbed like icebergs in a light gravy. And the gravy was the star, demanding quiet attention. Not loud, not dull; this was a Goldilocks gravy. In the grim kitchen out back, the cook happily shared the formula: onion, garlic and a knob of posto—poppy seed paste. Posto-mutton is popular in Bengali cuisine as well, but there the posto is a flamboyant soprano, whereas here it was a restrained contralto.

Also served with the rice were several vegetables and a bowl of dalma. Dalma is a complex dish of vegetables cooked with lentils and tempered with a tarka of mustard seeds and grated coconut. It is Orissa’s answer to the southern sambar. The other vegetable dishes, though, were very Bengali. There was radish greens cooked with pumpkin—just as in Bengal. There was a medley of winter vegetables—radish, cabbage, cauliflower, new potatoes—tempered with spices called panch phutan in Orissa and panch phoron in Bengal. Faced with this ensemble, I had this sudden clarity about Orissa as the bridge between the south and the east.

Oriya and Bengali cuisines are largely similar, but Orissa’s chakuli is akin to the South’s crepes like dosai and appam.

The Oriya and Bengali cuisines are largely similar, and yet Orissa’s chakuli is more akin to the south’s savoury breakfast crepes like dosai and appam than to Bengal’s chakli. The southern sambar loses its sourness and turns into dalma in Orissa, but is not a standout dish anywhere else in the east. This “bridge”-ness is naturally not limited to cuisine. Oriya is linguistically close to and sounds like Bengali, but the script has a touch of Telugu or Tamil. Whereas in textiles, Orissa’s Sambalpuri ikat is close to Andhra’s Pochampalli and nothing at all like Bengal’s Baluchari. Then there is temple architecture and the classical devadasi tradition of dance, in which Orissa is far more south than east. The list can go on.

The people of the Malay archipelago must have recognised this aspect of Orissa through centuries of trade contact with India’s east coast. Because to them all Indians were “Kling”, as in Kalinga—a form of address that continues in some pockets to this day. I thought about this as I stood on the banks of the mighty Mahanadi at Cuttack, at the site of Bali Yatra—Cuttack’s annual fair that celebrates the journey of Orissa’s ancient mariners who sailed to Sumatra, Java and Bali. 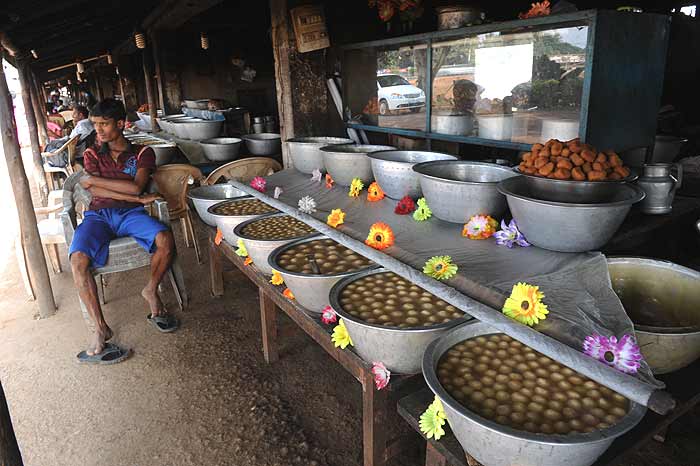 Orbs to gorge on Vats of rasogolla at roadside shops in Pahala, Orissa. (Photograph by Sandipan Chatterjee)

From Cuttack we drove 25 km east to Salepur, home to an Orissa institution: Bikalanada Kar’s original rasogolla shop. Now with branches everywhere, “Bikali” Kar’s rasogolla is wildly popular in Orissa. At the shop counter I asked for a sample and was handed a sealed plastic container. That should have been a clue. It took some wrangling to locate a vat with fresh specimens. The rasogolla was dark beige in colour, very dense and chewy, with a cloying edge to its sweetness. I couldn’t finish it. But it was interesting that the Pahala and the Bikali rasogollas are completely different animals, and are different from a Bengali rasogolla.

Past sundown, we flew towards Balasore on a section of NH5 that felt like Hema Malini’s cheeks. In the morning we entered Bengal at Jaleswar, crossing the Subarnarekha—a golden ribbon in the early light. From here on, it was Shibu’s turn to travel. I watched his senses open up as he rolled down the windows while driving through deep rural Midnapore: past shady bamboo groves, past ponds rippling with fish, through a fragrant breeze scented by acres of golden paddy, past homes and courtyards where women threshed the fresh harvest. By lunchtime we were at Tamluk, the current avatar of the ancient port city of Tamralipta on the banks of the Rupnarayan.

Post-lunch, Shibu waxed poetic about the fried brinjal split four-ways but held at the stem, and the enormous fish head he had chewed to powder. He thought the fish gravy was unfamiliar and exquisite, just as I had felt about the mutton gravy the day before. And the chhanar payesh—cottage cheese lumps in lightly sugared thickened milk—made him quiver. In the midst of this exchange, we got stuck in traffic. Tamluk’s annual fair was on and a procession of floats was heading down the street. A group of 20 dhakis—Bengali drummers—came up and started dancing in a circle right next to our car—their bodies taut, their sticks ablur.

As the dhakis reached a crescendo, I watched Shibu get swept away and felt a sudden, deep stab of affection for this mishmash, maddening country of ours. For magically staying glued together. 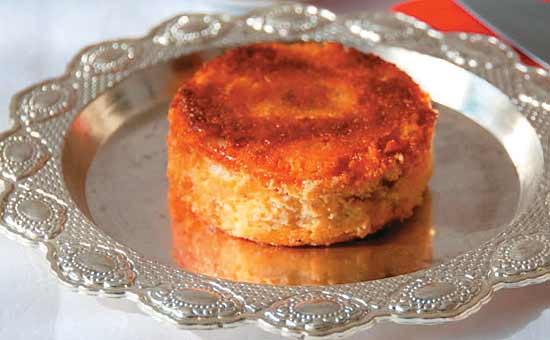 Pahala’s other delight is the chhanapoda—baked cottage cheese with a burnt caramelised crust. The perfect chhanapoda is as elusive as a moonbeam, but the Pahala recipe sounds breezy:

Mix 1 kg chhana, 300 g sugar, 40 g suji and a pinch of cardamom powder till smooth, place in an aluminium pan and lid it. Wrap the lidded pan with sal leaves, bury it in the belly of a dying chulha and let the embers weave their magic overnight.