Niira Radia joined us from an undisclosed location outside London and had begun work on—‘My Experiments With Untruth’. 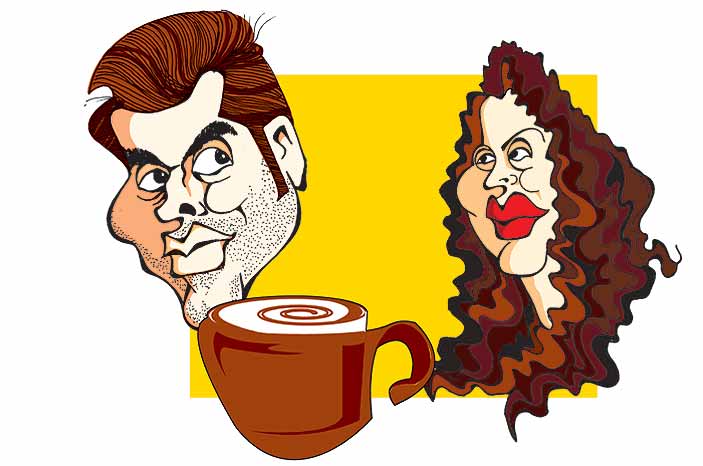 Everyone knows that a cuppa spreads warmth and brings out the best in people. This special episode though was recorded using a webcam. Niira Radia joined us from an undisclosed location outside London and had begun work on—‘My Experiments With Untruth’. Anyway, that’s an irrelevant detail, so let me not waste time and share the transcripts of this rare interview. Excerpts:

Karan Johar: Niira, it’s great to have you on the show. I must say I like your earrings.

Niira Radia: I picked them up from Bali two years ago when I went to discuss a telecom deal with an Aussie (con)sortium. But it didn’t work out since one of the promoters didn’t like the Bebek Betutu (roast duck) served at the Amandari luxury resort. Apparently, it was too short on candlenuts and humour and too high on black pepper corns. ‘Niira, there is no poetry in this duck,’ the gentleman in question declared with disgust and walked out. And to think that Vir (Sanghvi) who claims he is a great foodie had strongly recommended the Amandari!

KJ: Now, Niira tut-tut, tell me, can a roast duck have poetry?

NR: Karan, can I duck that question...? (laughs) But if it’s poetry that you want, you can get lyricist Sameer to pen something like ‘Duckie duckie tu hai luckky/teri pyaar hai pakki’.

KJ: (Giggles) That’s very naughty! But let me come to the all-important question—what do you make of the Niira Radia tapes?

NR: Well, it was Robert C. Murphy who famously observed that ‘To be listened to is, generally speaking, a nearly unique experience for most people. It’s enormously stimulating’. That’s what I told Ratan. Look at the number of people discussing the transcripts today.

NR: Hum sabki spectrum nein le li!  (laughs) By the way, that’s a good movie title for you. It can even be HSSNLL for the critics!

KJ: Who should I cast as Niira Radia?

NR: Aishwarya Rai, of course. The rest—Amitabh, Jaya, Abhishek, Rajnikant—will fall into place. It will be a great family drama!

KJ: Niira, let’s turn to another question: how do you explain all this talk about India being a banana republic?

NR: Well, what Ratan and I were referring to is the fact that India annually produces 11,000,000 metric tonnes of bananas. And these are figures given out by the International Network for Improvement of Banana and Plantains (INIBAP) and not Niira Radia.

KJ: So, what you’re implying is that with so much of it around we as a nation have always been bananas.

NR: Exactly! And ‘banana’ in  Hindi means to make/to build. Which is why our netas are always bananafying this and that.

KJ: How interesting! Finally, Niira, before I sign off you’ll be happy to know you’ve won a special hamper for your standout performance. And guess what’s in it? Choicest bananas from Tamil Nadu!