Member of the month-old Junior Tiger Task Force, this young cub, a class VIII student at The Shri Ram School, Haryana, roars out on the tiger crisis. 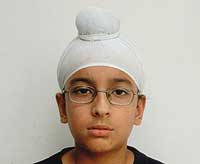 Your favourite animal?
I like all animals, especially the one-horned rhino. I'm only scared of snakes.

Have you seen a tiger?
At Ranthambore in 2001. I've been to Corbett and Periyar tiger reserves too.

What do tigers mean to you?
Survival. The forest is the river's mother. A tiger means the forests are safe.

When did you become an activist?
I joined Kids for Tigers in 2001, an awareness programme started by Sanctuary magazine. Today, with 700 schools and one million kids we're a powerful support group.

What inspired the junior task force?
After PM Manmohan Singh met us during this tiger crisis, we set up our task force.

Have you met the senior tiger task force?
They'll meet us in July. We will ask them about their findings and investigations.

Your own conservation plans?
We'll make villagers independent of the forest for firewood by giving them biogas plants. We'll give torches, shoes and raincoats to the guards.

What about funds?
We made Rs 8,000 selling lemonade. My friend sold paintings. wwf and Corbett Foundation have given us 2 lakh. Each paisa counts. We're asking cinema halls to donate a rupee per ticket sold.

You are proudest of?
The money. We are only one month old.

Your next field visit?
Ranthambore, after it reopens, to gauge the crisis with our own eyes.