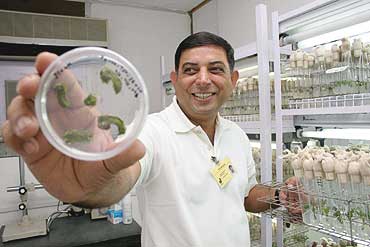 outlookindia.com
-0001-11-30T00:00:00+0553
"I care for them like my children," says Kiran mulling over the collection of shoots sprouting in test tubes and petri-dishes at the Genetic Transformation Laboratory, International Crops Research Institute for the Semi-Arid-Tropics (ICRISAT) in Hyderabad. Dr Sharma is principal scientist at this transgenic lab that has produced the world’s first genetically modified groundnut, pigeon pea and chickpea. Another product which could make an impact on the lives of India’s subsistence farmers: the GM groundnut with a coat protein from the peanut clump virus (PCV)—a common bane of Indian groundnut farmers, especially in Rajasthan. The GM variant is resistant to PCV.

Plant tangencies of this kind entails creation of varieties with new traits resistant to herbicides, pests and viruses. Besides developing transgenic crops, Sharma’s lab is developing a ‘golden peanut’—a GM groundnut with increased levels of the Vitamin A pre-cursor beta-carotene. As Sharma explains, 70 per cent of the crops produced by subsistence farmers are normally consumed by the farmer and his family. Therefore, such varieties could have direct implications in improving the nutrition intake of these families too.