Microplanning has transformed these villages. Involved in the process at every stage, people have learnt that only self-help can redeem their lot. 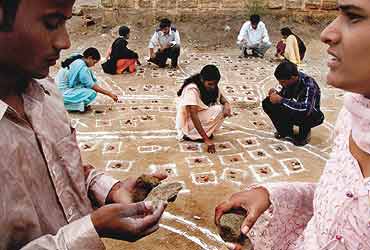 outlookindia.com
-0001-11-30T00:00:00+0553
Lendiguda is our destination, a village of 400 people in the tribal belt on the Maharashtra-Andhra Pradesh border. We drive 135 km from the district headquarters at Chandrapur to this remote hamlet in Jivdi taluka that administrative officials can't recall immediately. The last 12 km gets even more challenging as the "pucca" road ends and we bump over miles of stone and mud. It can get worse if you are a local from any of the seven villages in this cluster, because then you'd be walking this treeless distance to reach the nearest bus stop or health sub-centre.

It's a familiar story of the poorest of the poor—people who in the past have been without water for weeks after their well dried up in summer. Anganwadi workers and primary teachers hardly showed up; a routine fever could've meant death. If this seems like the land even God forgot, the eager smiling faces are nothing short of a miracle. Today, five years after microplanning was introduced, Lendiguda could well be a model village for the power of self-help.

Microplanning is a process introduced progressively in over 1,500 villages in Maharashtra over the past five years. It trains people to take their lives in their own hands, solve issues ranging from education to health and hygiene. Initiated by UNICEF, which works along with the local government and non-governmental organisation, this process invites complete social participation. The five-day programme runs at all administrative levels district downwards. At the village level for instance, youth handpicked from the village undergo training. They then implement the process in the village.

"The biggest change is that of mindset," says Devidas Kamble, secretary, Yuvak Mandal. People earlier saw the school or anganwadi as government property. A "chapatti" diagram on the wall that describes the relationships of the villagers vis-a-vis various bodies and government workers like the nurse or primary teacher or the village panchayat show a dramatic change. Earlier, the nurse was treated as an outsider while the Yuvak Mandal, the anganwadi, the zilla parishad school, the mahila mandal and the gram panchayat worked as disparate bodies. Today, the nurse has moved closer to the community while the other three have got closely mingled. The village looks upon these bodies and services as its own and hence takes charge of the quality of performance.

The community has learned to organise its might and demand services from governmental agencies. A morcha to the tehsil office got them their first borewell in '99. Another rasta roko and the school building was completed. A hunger strike and dharna got a road sanctioned last year. Expected to be completed in a year, this will be the harbinger of prosperity. Until now, no transport, water tanker, medical or educational service reached them.

Routing the process through the youth is the breakthrough. And the results show. Malnutrition is down. Over half the children are normal. None in grade IV, the severest malnutrition level. Every child is in school and vaccinated. Every pregnant and lactating mother takes the prescribed preventive and routine health care. The birth rate has come down in the last three years. Under the Jalswaraj scheme, the village has sunk two wells that it maintains hygienically. Incidence of malaria has dropped dramatically as has overall illness. Only nine people were taken ill in '03 as compared to 33 in 2000.

Six women's groups offer micro credit. The money pool helps them get agricultural loans of up to Rs 75,000 from banks at 3 per cent for the sowing season. The women have demanded the closure of the daaru bhatti and the village is alcohol-free. Only 13 kuchcha houses remain where there were just a few pucca homes. Three village boys have cleared class 12 and hope to return as teachers.

The village boasts of two autorickshaws, four motorcycles and as many cell phones and colour TVs. Kamble is already sending his son to the nearest convent school. "We've learnt to tackle our own problems," he beams as others nod. 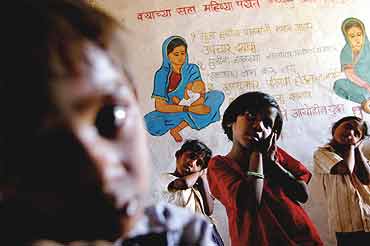 If Lendiguda's transformation is so dramatic given its desperate past, other success stories are no less inspirational. "Larger, non-tribal villages have their own unique problems, especially the caste system and age-old beliefs," explains Gopinath Menon, state representative, UNICEF. This couldn't be more evident than in Naandgaon in Ballarpur taluka.

Just 5 km from Chandrapur, this village had a school complex that appeared so impressive that you'd believe all's well. But health and nutrition, education, sanitation were neglected. Lactating mothers threw away the first milk, and instead fed jaggery-sweetened water in the afterbirth. Many infants contracted water-borne diseases and died. Children over a year were fed only milk and malnutrition set in. But no agency could convince the villagers against these erroneous practices. Girls' education was mostly neglected and boys and girls never spoke to one another.

"Being a part of this process has given us extreme faith in ourselves," says Ujwala Bhandarkar, 18, YF member. Boys and girls now study together and encourage dropouts to resume. They've built a public stage and a library. They demand adherence to sanitation practices from the residents and this year won the second prize for sanitation at the district level.

The YF, along with their counterparts in six other villages, have banned smoking, drinking and gutka. "The boys recognise the value of the ban. So do our fathers though they may find it difficult to kick an old habit," explains Bhandarkar. Now they go to other villages to impart information through street plays and counselling. The youth groups follow parliamentary practices and the different "ministries" deal with the authorities to sort out pertinent issues. They're beginning to understand the potential of revenue and micro credit. And have started offering small commercial services to residents. The idea is to earn and start a credit system encouraging entrepreneurship.

Fifteen hundred villages are at different stages of this process. The experiment has been so successful that other states are already starting to adopt it. Helping people only to help themselves proves, once again, to be the only path ahead. Charity, after all, helps no one.