The SP brings out the wooden argument 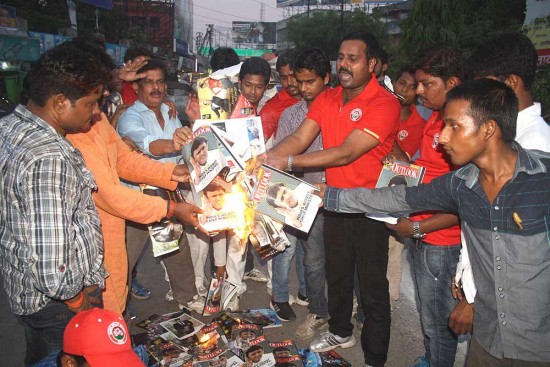 When Akhilesh Yadav emerged as the hero of the Samajwadi Party’s election victory in Uttar Pradesh 27 months ago, he was hailed as India’s youngest chief minister. Riding on his shoulders were the hopes of 20 crore people. But in the system of governance—or lack of it—scripted by his father, Samajwadi Party supremo Mulayam Singh Yadav, there has so far been little the son could do to prove his capabilities or bring about the changes he intended to.

In the Lok Sabha polls, the party was drubbed. And the law and order crisis in the state—the latest being a gangrape and hanging of another woman in Bah­raich, a shocking mirror of last fortni­ght’s incident in Badaun—has drawn huge criticism of Akhilesh’s governm­ent and his party. But the response to such criticism, in the media and otherwise, has been a streak of intolerance. Copies of Outlook with a cover story describing  him as ‘India’s worst chief minister’ were systematically seized as soon as they reached Lucknow and the party’s henchmen set them ablaze right in front of the state assembly. A bookseller known for his proximity to the CM is believed to have purchased all copies from the chief news agent for Lucknow. Party goons made a bonfire of them. Thanks to another news agency, which had ordered some copies, some readers managed to get the issue. After the incident, the demand for copies of Outlook went up. A news agent said, “Some 2,000 extra copies were sold as even clerks and peons at the secretariat were curious to know what had been written about ‘India’s worst CM’.”