In the hyper-kinetic Kill Bill 1 you did not know when the end happened, in Vol 2 you often wish the proceedings could hurtle to the finale, fast. 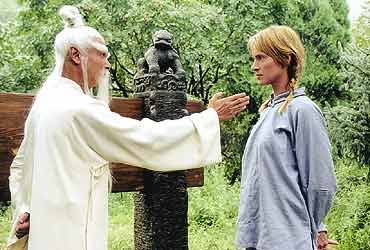 Kill Bill Vol 2 is as different from Vol 1 as it can get. Of course, the homage to American Westerns, samurai movies and Hong Kong action flicks is visible. But it has less deaths, violence, limbs flying in the air and much less blood. Tarantino works overtime to tone down the comic-book gore to try and make the film more of a cinematic whole than just an action tableau.

The action kicks off in beautiful B&W, on a self-deprecatory note. The Bride (Thurman) talks about Vol 1 as a "roaring rampage of revenge". She killed a lot of people there but one is still left, obviously her scorned lover and the father of her child, Bill (Carradine), who organised the deadly viper assassination squad to wipe her out on her wedding day. He himself is of the opinion: "That woman deserves her revenge and we deserve to die".

So the shadowy Bill of Vol 1 becomes a full-blown character here. The reptilian villain is disarmingly suave yet lethal. Carradine's old-worldly drawl is quite irresistible. The Bride is caught between motherhood and her instincts of a "natural-born killer": very Bollywood.

Some sequences crackle, like when the Bride is packed off alive in a coffin by Budd (Madsen). There's more than a minute long of pure blank black screen to bring alive the claustrophobia of the Bride. And then she rises six feet up to get on with life, goes over to the bar nearby, still covered in mud, to ask for a glass of water. Tongue in cheek as only Tarantino can get! Or Elle (Hannah) reading out carefully scribbled notes on Black Mamba, the snake she has used to kill Budd. Or the Bride pulling Elle's other eye out (the first had been plucked by Pai Mei for calling him a miserable old fool). It's a wicked world that only Tarantino can create.

However, he weighs things down by making the film too dialogue-heavy. There are stretches of stillness to let the characters talk and action set pieces appear like insertions. In fact, they aren't even played out in a massive expanse, like the Japanese teahouse in part 1. The climactic battle is a real letdown. Instead of rising up to a crescendo, it ends as a rather tame battle of words. In the hyper-kinetic Kill Bill 1 you didn't know when the end happened, in Vol 2 you often wish the proceedings could hurtle to the finale, fast.