A new edition of the Cup, a new posse of thoroughbreds. Who'll be the star of 2006? 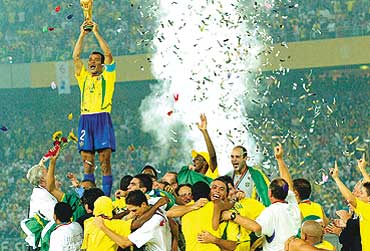 outlookindia.com
-0001-11-30T00:00:00+0553
Once every four years, 32 countries around the world put aside notions of difference, political squabbles et al to celebrate their inclusion in what everyone describes as the most effervescent party in the world. Bugles blowing, drums thumping, supporters painted in every colour of the rainbow are dancing into Germany for football's showpiece event, beginning June 9. Brazil, as always, is 9/4 favourite, but as that hoary cliche goes, in football you never know.

Brazilian coach Carlos Perreira is so confident he's already named a starting line-up for the first game. And it'll be led in the front by the magic quartet of Ronaldinho, Kaka, Ronaldo and Adriano, known to dumbfound the best of defences with their overlapping runs and silken ball control.

But as other coaches will be reassuring their players, there are chinks in Brasilia's armour. Predictably, the weakness stems from the back. In 2002, Gilberto and Emerson were at their defensive finest, breaking up counter-attacks and shielding the back four. But the former has hardly figured for Brazil recently and Emerson was made to look geriatric by Arsenal in the Champions League quarterfinals. The defence, as of now, lacks three vital commodities: pace, youth and confidence. Left back Roberto Carlos had his worst season at Real Madrid, his counterpart on the right flank, Cafu, sat out most of the season for AC Milan with injury. Juan is a defender of the comical variety, prone to flamboyance and, frequently, disastrous errors. In the back, it seems Lucio alone stands as a genuine defensive powerhouse.

Two of the biggest stars on the football firmament have done little to soothe Perreira's sleep patterns. Ronaldo's waistline continues to behave like an inflatable toy, while Adriano's season showed the debilitating effects of nocturnal indiscretions on a once-phenomenal goal-scoring rate. That leaves only Kaka and the incomparable Ronaldinho at their best. But as legends like Pele, Maradona and Zidane have demonstrated in previous editions, a genius of Ronnie's magnitude can elevate a team past any pretenders. 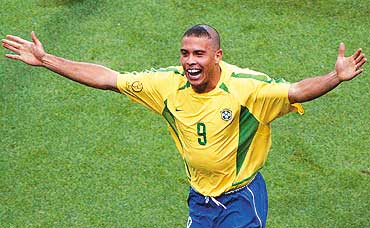 So, if not Brazil, who? Fierce rival and continental neighbour Argentina is staking its own claim. Their status as second favourite in the eyes of most experts, if not the bookmakers, is because of the coach, the astute Jose Pekerman, and two of the best playmakers in the game. Eighteen-year-old Lionel Messi has been singled out by none other than the legendary Diego Maradona, who had this to say: "I have seen the player who will inherit my place in Argentinian lore and his name is Messi. He is offering classes in beautiful football...my kind of player in our blue and white jersey."

The other great Argentinian hope is a comparative veteran at 27. Juan Roman Riquelme dragged his mediocre club team Villareal to the Champions League semis, showcasing his unique abilities to hold possession in midfield and snake through passes that no one else sees. A Barcelona reject after one poor season, Riquelme will feel he has something to prove on the biggest stage. Just as Villareal has done with so much success, Pekerman has designed the national team to play to the unassuming midfielder's strengths. With a squad including Crespo, Heinze, Tevez and Cambiasso supporting the two superstars, Argentina is quietly confident of its prospects.

Italy announced they're contenders when they demolished hosts Germany 4-1 in a friendly recently. Remarkably for the Azzurri, they are coming to the Cup with a vibrant attack. Marcelo Lippi, amongst the most respected coaches of all time, has eschewed the catenaccio-style of prioritising defence that Italy has brought to almost every edition of the World Cup. With agile, predatory strikers like Inzaghi and Del Piero and the hulking presence of Luca Toni feeding off the magic passes that the ludicrously gifted Francesco Totti provides, Lippi looks to have found the right balance. If Totti is back to his best (a fracture of the left fibula kept him out almost the entire season), Italy will boast a formidable attack. 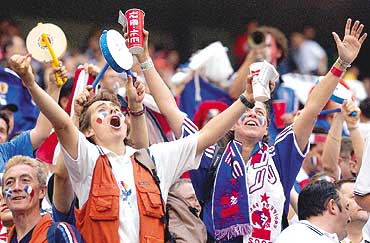 As always, it will also have the confidence of an experienced back line. In captain Cannavaro, Nesta, Zambrotta and Massimo Oddo, it has a defence with enough tactical awareness and quality. Gattuso will be a terror in midfield while Pirlo can pass the ball with the precision of an American quarterback. The only cloud on the Italian horizon: a match-fixing scandal that's engulfed the domestic league with top clubs like Juventus and AC Milan implicated. The national team claims to be unaffected but it must be playing on the players' minds, especially goalkeeper Gianluigi Buffon's, who was questioned by prosecutors last week.

England coach Sven Goran Eriksson has much to ponder. He's yet to decide what formation suits his team best in the absence of talismanic forward Wayne Rooney, throwing a previously settled team into disarray. The latest scan results indicate that Rooney's foot will not heal in time and Jermaine Defoe will probably have to be drafted in. Eriksson will know on June 7, only two days before the Cup begins, if the volatile Man U striker will be fit. British bookmakers have England at 7/1 (joint second favourites), but the squad's confidence will have been dented by the absence of such a vital player.


That is not to say England is not in with a chance. A genuinely world-class midfield boasts the likes of Frank Lampard, Steven Gerrard, Joe Cole and Beckham. The defence is solid—Neville, Ferdinand, Terry and Ashley Cole are all highly-coveted players, and the costliest backline now playing. Up front, however, in the absence of Rooney, and with Michael Owen only just regaining full fitness, it might have to rely on the questionable talents of beanpole Peter Crouch. He's certainly tall enough to unsettle defenders but has often been found wanting at the highest level.

Germany is the bookies' second favourite along with England. The home team is certainly talented but look a tad inexperienced. Miroslav Klose failed to bother defences at Euro 2004 or the last World Cup but he's been in superb form for Werder Bremen this season, scoring and creating goals at will. His partnership with rising star Lucas Podolski is based on good understanding and movement and works well within coach Jurgen Klinsmann's system.

Led by Chelsea's latest signing Michael Ballack, the midfield is as strong as it comes. Klinsmann has struck the right balance here between defensive solidity and attacking flair—Frings, Borowski and Schneider allow Ballack to make his bursting runs into the box while the side keeps its shape. Goalkeeper Lehmann is the in-form custodian of the tournament, which is fortunate because his defence team will be giving the Arsenal player nightmares. Only one, Nowotny, is a defender of the highest quality. His central defensive partner Mertesacker is a rarity; a defender who seems loath to tackle. In their penultimate warm-up game this week, they leaked two goals against lowly Japan before late strikes saved them the blushes. 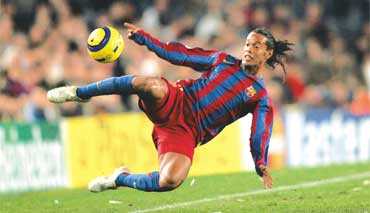 The last side to win the Cup at home was France in 1998. After disappointing in the 2002 edition with a star-studded team, the French struggled to qualify for this year's tournament. But the return of Zidane, Makelele and Thuram has meant a fresh lease of life and once again all of Gaul dares to believe. France is hindered, though, by the mercurial disposition of coach Raymond Domenech.

Domenech began his reign by involving himself in a public spat with Les Bleues winger Robert Pires and then compounded that by fighting with striker Nicolas Anelka—at a time when his team desperately needed a goal-scorer with flair. And a few days ago, goalkeeper Gregory Coupet, who has had a sterling season for Lyon, was told he would be replaced by the erratic Fabien Barthez. Coupet almost quit the team. Coupled with Domenech's lack of man management is his tactical naivete. To be unable to coax worthwhile performances out of a gem like Thierry Henry is inexcusable, pointing towards a lack of adventure that could derail any hopes France might harbour. But uncapped star Franck Ribery is one to watch on the flanks, with pace to burn and the ability to provide lethal crosses from either foot. 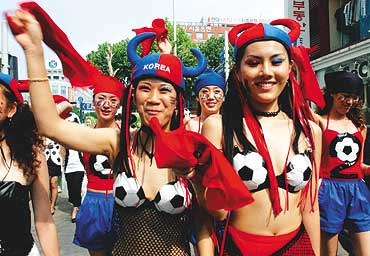 Of course, there are others with a genuine chance of parading the trophy around the Olympia Stadium in Berlin on July 9. Spain has some of the most exciting footballers on the planet but is a perennial under-achiever on the big stage. Holland is another, never having won the trophy even though 'total football' of the Cryuff era helped revolutionise the game. Portugal also has great potential and a very shrewd coach. The Czech Republic proved to be an outstanding team in World Cup qualifying and could be more than a handful for the big guns. Of the African teams, Ivory Coast looks most likely to mount a decent challenge. Guus Hiddink-inspired Australia could be a surprise entry in the semis.

It has to be said, however, that the way the teams are shaping up it looks like the tournament is Brazil's to lose. Thirty-one other teams will spend an arduous month, struggling to alter that outcome as they pursue a dream.