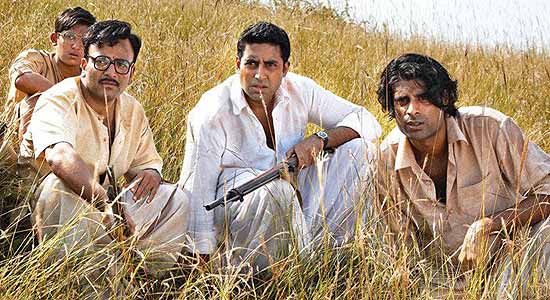 Khelein Hum Jee Jaan Sey is a film that was waiting to be made. Based on journalist Manini Chatterjee’s book Do and Die: The Chittagong Uprising: 1930-34, it’s a laudatory attempt at taking an important, though uncelebrated part of the nation’s history to the masses. But good intentions don’t necessarily translate into great cinema; KHJJS is a terrific opportunity lost. Despite its fiery, moving content, the film itself feels disappointingly inert, soulless, flat and dull. It gets briefly engaging towards the fag end as the martyrs lay down their lives. But eventually, none of them leaps out of the screen, nor stays with you. The root of the problem, perhaps, is that the actors fail to live up to their characters. They’re visibly aware of the slice of history they’re playing out but don’t seem to make any effort to internalise it. So Sikander might have the square jawline of Nirmal Sen, but displays no passion. It’s evident in the introductory scene of Masterda with Abhishek Bachchan’s eyes earnest and pious but curiously lacking depth. Deepika’s body language, especially while playing badminton, is so today, not to forget the manicured nails. The Bengali setting with overstress on ‘o’ feels just as awkward.