Khakee has something for everyone. 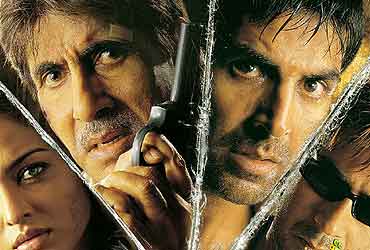 The story of a small group of honest men in uniform taking on the system may not be a novel idea, but Rajkumar Santoshi gives this anti-establishment film a whole new colour with his honest treatment of the subject. DCP Anant Srivastav (Amitabh Bachchan) is assigned the arduous task of bringing a terrorist (Atul Kulkarni) to Mumbai from Chandangarh. The DCP's team includes a senior inspector, Shekhar Verma (Akshay Kumar), who is clever but corrupt to the core, and sub-inspector Ashwin Gupte, who has all the good intentions and values in place. What starts off as a routine affair turns out to be a shocking revelation in several ways. One such shocker is Angre (Ajay Devgan), an ex-police officer who is the face of the corrupt in the system. The DCP's team ultimately takes on the establishment in a fight-to-finish.

Santoshi and co-writer Shridhar Raghavan's police drama holds the viewer's attention right from the word go. There may be cinematic liberties, but it's difficult to find too many faults in the screenplay—a rarity in Hindi cinema in general and action films in particular. If the light moments in the first half keep one thoroughly entertained, the tension and the action post-interval are extremely appealing. The punches in the dialogue or the novel scenes are praiseworthy. Note, for instance, the manner in which Angre gets even with DCP Srivastava—by compelling the DCP's juniors to do something no subordinate would even dream of.

It is scenes like the above, besides some shocking turns and twists, that make Khakee stand out despite its routine story. Santoshi's direction is first-rate. Amitabh Bachchan is like old wine. Ajay Devgan plays the wily, wicked terrorist with elan that could give the villains of the industry reason to run for cover. Aishwarya Rai not just looks ravishing, but also acts with aplomb. Atul Kulkarni delivers convincingly. Tusshar's earnestness is endearing. The boy makes a very good mark. Akshay Kumar is a revelation. He springs the biggest surprise of the film with his comedy and perfect sense of timing.

In sum, Khakee has something for everyone. It's a good blend of action, tension, drama, emotions, songs (don't miss sexy Lara Dutta's energetic gyrations in the Aisa jadoo number) and comedy too!