How does the former Pak skipper, tainted by match-fixing charges, continue to influence cricket? 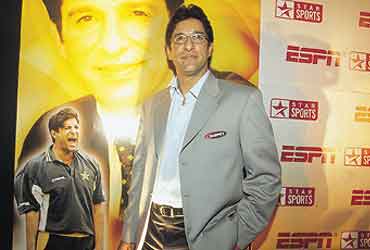 outlookindia.com
-0001-11-30T00:00:00+0553
That Wasim Akram will not be India’s bowling coach may come as a big relief to cricket lovers who strongly believe that ‘tainted’ players shouldn’t exercise any influence, whatsoever, on the game. Indian skipper Saurav Ganguly confirmed in a February 26 press conference: "No, it won’t be Wasim Akram. He (the coach) will be an Indian." A BCCI official told Outlook that "keeping Akram out" was only in keeping with the unwritten ICC rule: those linked to match-fixing or being investigated for their involvement should not be seen doing any business with a cricketing body.

Even though his playing career is over, the former Pakistan captain may still continue to play a role in the forthcoming high-profile, high-security India-Pakistan series as an ESPN commentator.

Despite the flood of reports in the Pakistani, Indian, Australian and English media on Akram being investigated by the ICC’s Anti-Corruption and Security Unit (ACU) for match-fixing, ESPN is stuck on its old theme. Says Himangshu Verma, the channel’s associate director (corporate communications), "The issue is still speculative."

Akram is being investigated by the ACU for "underperformance" in the ’99 India-Pakistan World Cup match. He has since then sought pardon from the accountability cell of Pakistani PM’s office for keeping the tax authorities in the dark about his earnings and assets abroad. He had also tendered a written apology to the then Pakistan president for "omissions and commissions committed in the past"("A Beamer Ball" ).

Former cricketers and commentators Outlook spoke to felt there was a question of "ethics and morality" involved in hiring a commentator facing an inquiry. Barry Richards, former South African captain and now commentator, told Outlook from New Zealand: "If it is a serious offence and if he (Akram) is prosecuted, then there is a big issue involved here. Obviously, we’ll have to wait for the inquiry to get over. It’ll be harsh to judge him before that." But when drawn to a specific question of whether it was right for a channel to have on board a player who was still being investigated, Richards said, "I suppose it’s up to the channel to weigh the issues involved and decide."

Says Pakistan Cricket Board’s (PCB) chief executive Rameez Raja: "Sure, to an extent, there is a question of ethics and morality here. But at the end of the day, has he been pronounced guilty? Why don’t you ask ESPN? It’s a responsible institution and it’s up to it to decide."

However, Akram’s other colleagues chose to maintain a stoic silence. Says Pakistan coach Javed Miandad: "Don’t ask me. Ask the PCB." Former wicketkeeper Rashid Latif, who will be bringing out a "definitive" book on match-fixing later this year, told Outlook?: "I don’t know anything about this." And Ravi Shastri, who co-starred with Akram on the ESPN’s Shaaz and Waaz Show said, "My contract with a newspaper does not permit me to comment."

But despite the ACU chief, Lord Paul Condon, having written to the PCB twice about the Akram probe, he has received no cooperation from it. In fact, last week came the surprise announcement that Akram will be lecturing Pakistani bowlers in the national training camp beginning in Lahore ahead of the series against India. Are the ACU and the ICC listening?