Keeper Of The Customs

She was the poor, out of town girl who turned a fixer in Delhi's halls of power. But in the end, Bhavana Pandey wasn't 'polished enough' to last the circuit. 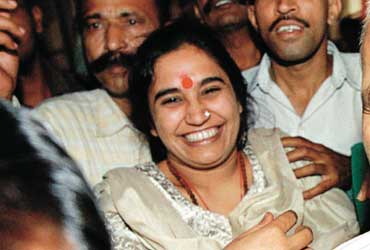 Ever since she was picked up by the CBI on April 1, along with the Central Board of Excise and Customs (cbec) chairman B.P. Verma, on charges of conspiracy, 31-year-old Bhavana has proved to be an enfant terrible in custody. "She's loud, throws tantrums and boasts of her connections," says an investigator. Given to erratic moods and capricious behaviour, Bhavana has given her interrogators a trying time as they attempt to extract some information out of her. Says an exasperated CBI official, "We really don't know what to believe and what leads to pursue."

Just who is Bhavana Pandey? How has she managed to transplant herself so successfully from the environs of small-town Haldwani, in the UP foothills, into Delhi's corridors of power—and actually thrive in the sleaze and murkiness that pervades there. Just what are her political connections, and is she privy to political wheeling-dealing? While Bhavana has been talking a lot, her interrogators don't quite know what to make of what she tells them. And for over a week now, they have been trying to understand this mystery woman.