Before the quotas, identify the OBC. That is the new wisdom. Updates 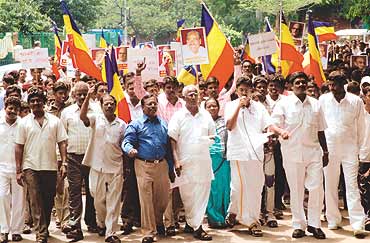 The National OBC Commission set up in 1993 had refused backward status to 456 castes and subcastes. Here are some prominent ones which were not put on the list:

The Cream Of The OBCs

As per the National Backward Classes Commission, children whose parents fall in these 7 categories are ineligible for job reservations...

Every time the government pays obeisance at the altar of social justice and invokes reservations, it's the same old demons that return to haunt. Who are the actual beneficiaries of reservations? Is it the really deserving among the Other Backward Classes, or a 'creamy layer' that skims all the benefit from the reservations bucket? Has the government, ever eager to pull the reservations rabbit out of the hat, made any attempt to identify those who have already availed of quota benefits, and moved on to balance the social stakes at the lowest rung? How desirable are reservations anyway in this era of equal opportunities? Even as the nation continues to get exercised over the issue, and emotions run high within both the pro- and anti-reservation camps, there is still little reflection on which castes need reservations and which don't.

It was precisely for this task that the National Commission for Backward Classes was set up in 1993. Its mandate was to identify socially and economically backward castes/communities, and delist those which had already made use of reservations and moved up. Though guided by the political compulsions of the government of the day, the commission attempted to correct the anomalies of the Mandal Commission report, mainly its exclusion of several subcastes. It has periodically conducted social audits to determine the status of various castes. Not every caste that has staked a claim on reservations has made it to the national OBC list; as many as 456 castes have failed to convince the commission of their social/ educational backwardness.

Of course, the commission's work is far from complete. Some of the dominant backward castes, like the Nadars of Tamil Nadu, remain on the list. Good old politics keeps them there: no political party wants to upset powerful OBC lobbies; those in power would rather that the commission maintain status quo instead of dislodging the government. However, if the commission is given a free hand, it has the infrastructure to provide a comprehensive status report on OBCs.

And the conclusion it arrives at on the basis of various studies and public hearings is that reservations are necessary. The commission's current chairperson, Justice S.R. Pandian, has noted: "That a few of the seats and posts reserved for backward classes are snatched away by the more fortunate among them is not to say that reservation is not necessary. This is bound to happen in a competitive society like ours. Aren't unreserved slots snatched away by the creamy layer among forwards?"

And so the debate has moved to the next level: should reservations be made without ascertaining the extent of backwardness among the beneficiaries? The OBC groups weren't too happy with the Supreme Court stay on the government's attempt to implement the Central Educational Institutions (Reservation in Admission) Act, 2006. Andhra Pradesh and Tamil Nadu led the pro-reservationist charge: both states witnessed bandhs for the quota cause. But the apex court in its interim stay order sought a more realistic basis for reservations and asked for a headcount of OBCs and identification of the creamy layer.

The ball is therefore back in the commission's court, with the government seeking its help in answering the apex court's questions. On its part, the commission has already spelt out the parameters to identify the creamy layer; it is now up to the government to zero in on the already-benefited and ensure they are derecognised. Says constitutional lawyer Rajeev Dhawan: "The creamy layer mechanism, which provides the guidelines for disentitlement, should be followed to ensure that those not deserving are kept out." It is the only way to make reservations more credible, and ensure its benefits accrue to the truly deserving. It should also go some way in appeasing the anti-reservationists who cite the example of individuals who have benefited unduly to point out the lacuna of reservations.

But reservations for politics' sake is something even staunch votaries of reservations like D.L. Sheth caution against. Says the former member of the OBC commission: "If the Mandal policy has prevented a huge turmoil in checking subaltern marginalisation, the time has now come for a relook." However, he realises the enormity of the task when he asks: "But who will bell the cat?" He is referring to the hard decision that will have to be taken to "put out of the benefit system" communities with political and economic clout.

But whether for or against the reservations motion, the opposing sides are agreed on one thing: that the issue has to be sorted out, one way or another. Collating real data would be a first step in that direction as that alone will help one put a finger on the extent of backwardness in the country. Such an exercise may exclude the forward minority among the backwards. But that would not dilute the 27 per cent reservation fixed for OBCs in IITs, IIMs and other institutes of higher learning. As P.S. Krishnan, advisor to Union HRD minister Arjun Singh, puts it: "There can be no doubt on the 27 per cent. If a real headcount is done, you know who will be having the last laugh..."