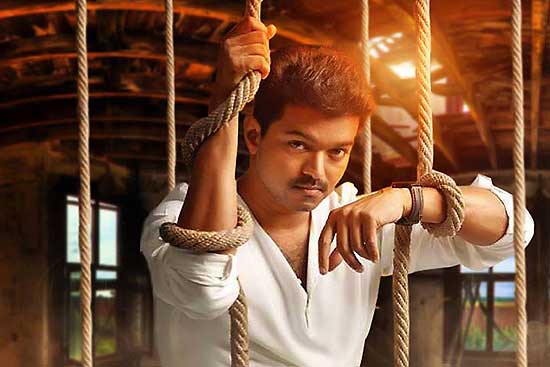 Nothing is ever simple in our dear country. Not even farmer suicides, nor the blatant disregard of laws by the rich and pow­erful. There is no simple story that can be told today. And what Kaththi shows is that stories cannot also be told simply. Not even the simple story of a rich MNC who is driving out farmers and buying up farming land for their factories until a thief-turned-saviour turns the tables on them.

When nothing is simple, you have the following: a thief set to catch another thief becomes a hero on the way, a girl falls for the wrong guy but for the right reason, the thief who would do anything for money except that he doesn’t when money comes his way, and the final transformation of an innocent Romeo into an angry vigilante.

It is impossible to watch this movie without a sense of cynicism creeping up on you. The villains are the corporates; not just one bad apple but all the apples in the basket. The rich ‘corporates’ are so heartless that they can even change a thief’s heart. But what follows is heartening. The final stand by the hero revives one’s faith in civil disobedience, in the lumbering democratic impulse of a tired society. The latter part of the film is the saving grace after a mediocre first 30 minutes or so. At the end of it, I am moved but that bit of cynicism remains.

For nothing is simple: a movie against corporate greed is filled with corporate sym­bols, running in theatres where a Coke is Rs 120, even while we are told that this soft drink manufacturer is filching water from the farmer’s land. Alas, this corporate film, produced in the same corporate wast­eland of other corporates, creates enterta­i­nment out of genuine suffering and misery of the dispossessed. The suffering is glo­ssy, and if we get a bit tired of it all, there are the striking dances and songs to distr­act our mind. In the end, I can’t shake the feeling that this movie isn’t really about the farmers but more a launching pad for another Tamil actor to enter politics.