Kashmiris Have Been Lured Into The Trap Of Glamourised Terrorism: J&K Governor Satya Pal Malik

Jammu and Kashmir governor Satya Pal Malik speaks to Outlook about the “fatigue factor” kicking in against militancy, people’s desire for development and the future of the state’s special status. 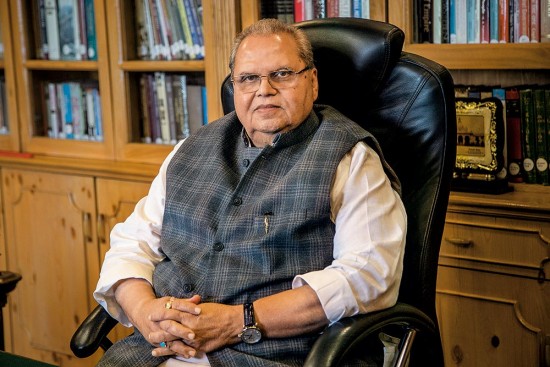 Set to complete one year as the Governor of restive Jammu and Kashmir under President’s rule, Satya Pal Malik, the first politician in the Raj Bhawan in Srinagar, shows no signs of discomfiture. Sitting in his walnut-wooded office overlooking the Zabarwan Hills, he speaks to Bhavna Vij-Aurora and Naseer Ganai about the “fatigue factor” kicking in against militancy, people’s desire for development and the future of the state’s special status. Edited excerpts

Panchayat elections have happened peacefully. Several measures to improve administration, like the ‘Back to Village’ programme, have been initiated. Is it time for mainstreaming of Kashmir?

Integration is happening in a natural way as tempers have cooled down and people want development. Kashmir worsened over the years because of Delhi’s leadership in the past. It made chief ministers without elections, declaring defeated candidates as winners. Those who won were not allowed to become chief ministers. This destroyed the faith of people in Delhi’s and the state’s leadership. The leaders of the Valley, who would tell people lies and show them dreams of secession and autonomy that couldn’t be realised, are responsible for this situation.

How will you convince the youth of the Valley to not pick up guns?

Those in the age group of 13-26 are frustrated with the situation. They have no faith in the Hurriyat or the mainstream political parties of the state. I admit they are unhappy with us also. I interact with the youth regularly and get instant feedback from them. Pakistan is feeding a narrative of Islamic fundamentalism to the young generation of Kashmir—the narrative of...