This remake strays very little from the original, yet there's a marked difference—the original entertainer turns into a dull dud in the hands of Satish Kaushik 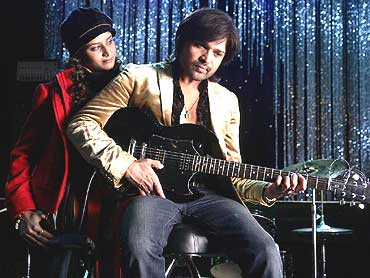 Karzzzz marks a significant step forward in the career of actor-singer Himesh Reshamiyya. The film will go down in history as one where Himesh’s trademark baseball cap gave way to a shockingly generous mop of hair complete with a girly bang on the forehead. However, the jury is still out on whether this transformation has been due to hair transplant, hair weaving or a mere wig. He still sports the stubble but manages to paste an occasional smile on his famously deadpan face. So do we like this brand new (and supposedly improved) Himesh? Well, his equation with the audience remains much the same. Those who like him continue to hold a candle for him and those who think he is all sound and no fury would remain immune to his charm. In a nutshell, nothing changes despite the changes.

However, the reverse of this logic holds true for the film. The remake of the 1980 Subhash Ghai hit strays very little from the original, brings in few changes other than the starcast, yet there’s a marked difference—the original entertainer turns into a dull dud in the hands of Satish Kaushik. The Rishi Kapoor-Tina Munim starrer was certainly not a classic but it was the symbol of "cool", set trends and was worth the packet of popcorns. It had some rocking music by Laxmikant Pyarelal that continues to be re-churned. The music of Karzzzz fails to stir. No wonder the first half of the film is insufferable because it’s a stringing together of songs. Himesh, as rockstar Monty, sings on stage with some white female skin for backdrop. And wonder of wonders—he makes women faint. Ladykiller Himesh asks for a tremendous suspension of disbelief! More disbelief happens when he hits the high notes on the guitar and some visions from the past float by. And so he goes back to his last birth as Ravi Verma (Dino Morea) and then moves forward to wreak vengeance on his deceitful wife of the past, Kamini (Urmila). Things get bigger to suit the times. The car accident is replaced by an aircrash. The deliciously named villain Sir Juda stays but has a computer fitted onto his metal arm from which he indulges in his villainy. And yes, we do miss Rishi Kapoor and Simi Garewal.