Karunanidhi inhabited the Dravidian cause with rare passion. He is irreplaceable. 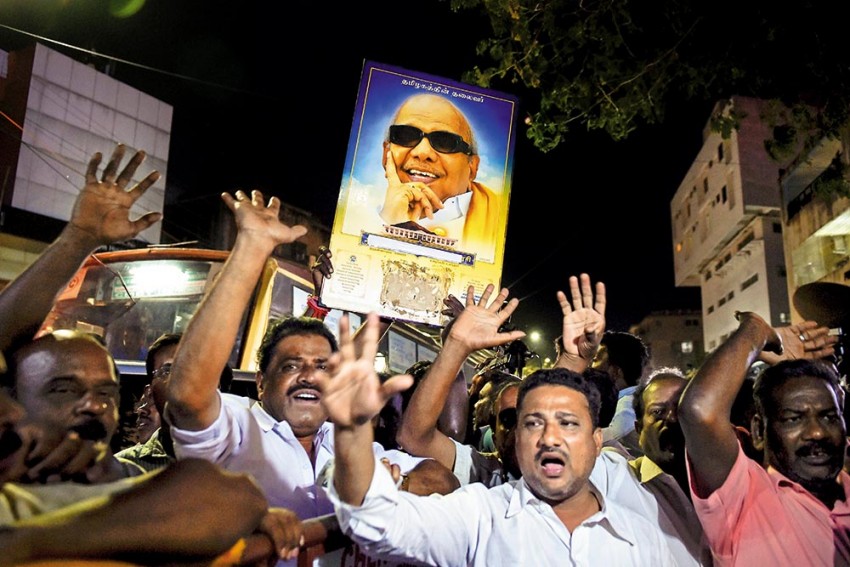 R. Kannan August 09, 2018 00:00 IST Karunanidhi Will Be Remembered As One Of Independent India’s Tallest Sons 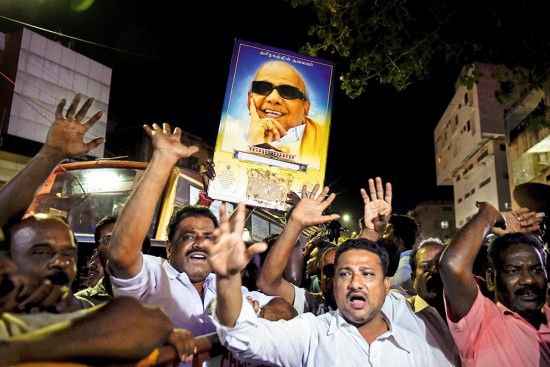 The Presentation sisters wanted the pupil’s name changed from Stalin if he was to be admitted to their renowned Church Park Convent, then a co-ed school. The Catholic sisters’ aversion to the Soviet dictator was understandable. The father made it clear that the name of the boy, born four days prior to the Soviet leader’s death, was non-negotiable. “We should be ourselves,” he told his son, who was found another school. The father, M. Karunanidhi, was later to be the chief minister of Tamil Nadu and the president of the DMK.

This steadfast integrity was typical Karunanidhi, and as a con­­trarian he swam upstream for the cause of Tam­­ils and Tamil Nadu in a public career spa­nning nearly eight decades. Almost till the end, a wheelchair-bound Karunanidhi pushed the limits of human endeavour much like his early mentor, E.V. Ramasamy Periyar (EVR). From very modest beginnings, he rose by sheer dint of industry, competence and acumen to shape Tamil Nadu’s destiny. To his detractors, however, he was parochial, an unabashed political opportunist and a man who put his family first.

Karunanidhi was an early bloomer. Consumed by the Dravidian movement, he failed his intermediate exams in all the three attempts allowed. But the movement’s leaders, EVR and C.N. Annadurai (Anna), saw promise in him. In 1945, on the invitation of EVR, Karunanidhi joined Kudiarasu daily as an assistant editor. It would turn out to be the best apprenticeship he could ever have had. A year later, he penned the script for Rajakumari, where he met MGR, its hero. A string of successes would make them a household name by 1950.

Earlier, in the 1949 split between EVR and Anna, Karu­nanidhi stood by Anna. His dedication to the movement was so total that he wasn’t by his (first) wife’s deathbed, having gone to address rallies. Not surprisingly, in less than four years, he would lead the party’s now famous Kallakudi agitation in 1953—displaying leadership skills and cementing Anna’s confidence in him. That year, he would also entice MGR into the party. In 1967, the DMK came to power.

Karunanidhi regained power in 1996 and influenced national politics, though losing in 2001 and 2011.

In 1969, Karunanidhi at 44 succeeded the seasoned Anna as chief minister and party leader. From now on, he would be referred to as thalaivar (leader). His time was mostly spent with the cadre; the family came to accept that he was larger than just a family head and his calling was to lead the state.

Karunanidhi took the social revolution engineered by the DMK forward with his left-of-centre agenda, social justice, populist schemes, Tamil cultural renaissance and clamour for state autonomy. His style, operation and political strategy catapulted the DMK to a national role. Then PM Indira Gandhi banked on his support both for her reformist agenda as well as to break free of regional bosses like Kamaraj.

In 1971, the DMK was reelected with a brute majority. Karunanidhi now emerged out of Anna’s shadows. The DMK’s phenomenal growth and Karunanidhi’s ideological assertiveness grated Indira Gandhi’s lieutenants in Tamil Nadu. Relations with Delhi began to sour. Consequently, the Centre’s machinations saw MGR’s revolt in October 1972.

A new low was reached when Thalaivar fie­rc­ely opposed the Emergency.  His government was dismissed on January 31, 1976, and a witchhunt of DMK men followed—over 400 party workers were jailed under MISA. In this dark period, he refused to yield.

The post-Emergency phase saw Karunanidhi consigned to the political opposition till 1989. In opposition, he worked even harder (he is said to have worked 18 hours and seen at least a 100 people every day) and devised newer strategies to keep himself and the party relevant.

Meanwhile, Jayalalitha had succeeded the late MGR. In 1996, Karunanidhi would return to power, thanks to Jayalalitha’s ostentation and venality. From that year till the 2011 polls, he played a key role in the making and unmaking of governments and PMs, although he would lose power in 2001, return in 2006 and remain out of power from 2011.

In April 2009, in the wake of the final Eelam war, he wrote: “I don’t know the way—I am in a responsible position—yet in a hapless state to save our race…I don’t know what to do….” The Tamils of Tamil Nadu, however, have always known what to do with him. They have celebrated him and deserted him in equal measure throughout his career. Indeed. Karunanidhi would be remembered as one of independent India’s tallest sons and the sole torch-bearer of the Dravidian movement in the post-Annadurai era.

(The author, the deputy head of the UN Assistance Mission in Somalia, is the biographer of Anna and MGR)