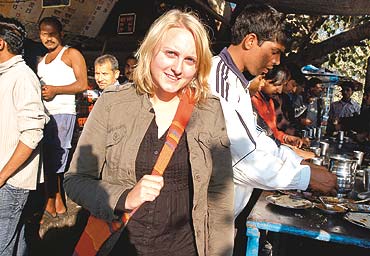 outlookindia.com
-0001-11-30T00:00:00+0553
Once young people from the West saw India as a destination for those on a spiritual trip—goras who had lost their way, hippies weary of the capitalist rat race. But now, a very different type of young foreigner is heading our way—and for very different reasons.

India has become a prime destination for gap-year students: a new breed of get-up-and-go youngsters in tune with the demands of the global economy. In a practice that caught on in the '90s, students poised between school and university in the West take a sabbatical to travel and/or work. Hundreds of them are here, from the US, Europe and Canada, even places like South Korea and Russia—all looking for between a few months to a year of experience in booming and socially diverse India. Their jobs range from internships in financial consultancies in Gurgaon, work on sanitation problems in Tamil Nadu's fishing hamlets, teaching sports in Rajasthan to helping out on elephant conservation farms in Kerala. The possibilities for social work, especially, are drawing big numbers from across the globe.

A rash of companies has come up in recent years to cater to gap-year needs. Gapguru, set up in 2004, has helped foreigners get jobs of all kinds in India. Exults CEO Arvind Malhotra: "India is a gap-year destination for high achievers. Students who have excelled at school and are heading to the top universities come to us." Most of the students are 18-year-olds travelling after finishing school, but there is also a rise in applications from mid-career 'gappers' who want to take a break from their jobs.

Gapguru has placed about 400 applicants in India this year, most of whom earn between Rs 1.60 lakh to Rs 2.40 lakh for a six-month stint. Malhotra believes the trend will only grow as they get to learn more about the opportunities here.

Cyril Delattre, a 21-year-old from France, is already aware of them. He came to India in July for a five-month internship with Gerson Lehrman, an independent research MNC. Before he leaves, Delattre will spend three weeks in Guptakashi, Uttaranchal, working for an NGO, Action Jacques Vignes pour l'Inde. He was offered opportunities in Hong Kong and China but, after some quick research, opted for India. Cyril says he needed to get out of Europe to experience a different culture. "India's recent economic upswing was a key factor. Now when I interview in France, people will see that I've taken on challenges...that I am adaptable," he notes.

Was adjusting to Indian people and the local way of life hard? "All I'd heard was Indian people would be friendlier than the Chinese! And that's certainly been true," says Dellatre. "I work with many Indians and we go out for drinks or dinner after work quite often. It's been fun."

Eva Hagan, a 25-year-old fresh from Norway interning for a year in Delhi at the market research firm TNS, concurs, but adds, "I didn't know anyone when I came here—and I still haven't met a Norwegian. I live with five other interns, all from different countries, I mostly hang out with them. It's just easier to make friends with people from abroad because we are all in the same situation of being without friends and family."

Siddhartha Tawadey started People Tree in 1997, a gap-year company that specialises in finding jobs at non-profit organisations. This year, it has placed 90 applicants from America, Germany and Austria—mostly from fairly privileged backgrounds. Says Tawadey: "We have supported a number of great projects. The challenge is to match the applicant with a programme that suits them."

Those coming for social work usually have mixed motives. They want to do something worthwhile but they also realise offbeat experiences in India will interest employers. Orly Friedman, a final-year student at Yale, has just begun searching for a job after spending the last summer as an unpaid teaching volunteer at an experimental boarding school off Bangalore. The feedback from her interviews with management consultancies has been positive. "My Indian experience separates me from others. The firms I have interacted with prefer students with some appreciation for what's taking place outside America," she notes.

Adds Tawadey: "In the West, social work is associated with red tape and macro policy work. In India, students can walk into an understaffed project and immediately make a difference."

But not everyone left feeling they had made an impact. Sarah Cross, 23, a trainee doctor from England, did a two-month medical elective in India, in a mission hospital run by an Indian doctor. In an account published in the British daily, The Guardian, she admits, "I realised that to practice medicine abroad you need to be part of the community. In India there are a lot of brilliantly educated people who understand the communities they are working with far better than doctors from the UK could."

Whichever part of the world they come from, India's reputation for poor sanitation and tummy-troubling food seems to top the list of worries of newly arriving foreigners. But as the number of aspiring teachers, conservationists and corporate workers arriving on our shores continues to grow, the image that young people have of India is changing. Twenty-two-year-old French business student Lynne Allaham, who also interns with Gerson Lehrman, is one of them. When she leaves in end-January, she will have spent seven memorable months in India. "It's lovely that you can get on a bus and go anywhere in the country for a few rupees. I went up to Leh and was amazed by the sights. You can't judge a country by first impressions."

Hagan had a bad experience when she left for Amritsar last weekend—but with an unexpected twist. Her cellphone and purse were stolen on the train. "I was totally distraught. But my business card helped, I got my passport on the mail! That's the amazing thing about India—it always has a few surprises in store."

'We Need Players Who Last 70 Mins'