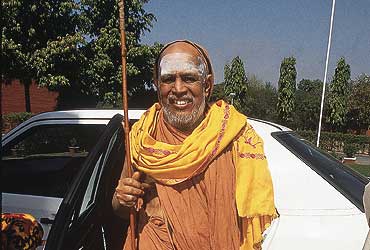 outlookindia.com
-0001-11-30T00:00:00+0553
When Jayendra Saraswati, the Shankaracharya of Kanchipuram, flew into Delhi last fortnight at PM A.B. Vajpayee's invitation to resolve the Ayodhya tangle, he sparked off much optimism. But with the All India Muslim Personal Law Board (AIMPLB) rejecting his plan and the Supreme Court ruling against puja being performed, the Shankaracharya isn't as buoyant as he was 10 days ago. "This is only an interim order. But to make the Hindus happy the Muslims could still consider allowing a symbolic puja," Saraswati told Outlook.

He didn't comment on whether his trip to Delhi had come to naught or whether he would continue with his efforts to solve the mandir-masjid issue. However, he did caution the Muslims against celebrating at a time when the Hindu community suffered discomfort. "The Muslims shouldn't celebrate the ruling...the Hindus are already hurt and unhappy. The Muslims should stop offering namaz on days like December 6. What has happened has happened. They should learn to forget it. There is no more a masjid now."

Ayodhya is not unfamiliar territory for Saraswati. The head of the Kanchi math is close to the temple movement and has played advisor to the Sangh parivar as well as senior politicians, including prime ministers. It's no surprise then that his Ayodhya formula was absolutely similar to the one presented by attorney general Soli Sorabjee before the Supreme Court bench—allow the puja and then hand over the 'undisputed' land to the Ram Janmabhoomi Nyas.

Though he wields considerable political clout, Saraswati's math at Kanchi isn't among the four peethas—Puri, Badrinath, Sringeri and Dwarka—established by Adi Shankara. The official website of the Kanchi math, however, claims that Shri Kanchi Kamakoti Peetham was established by Adi Shankaracharya in the year 482 BC. History tells a different story, though—Shankara didn't come before Christ. (The date currently accepted is 788-820 CE [common era or AD].) The other peethas don't recognise Kanchi as one among them. Originally located in Kumbakonam, the math was relocated to Kanchipuram in the 20th century by the late Chandrasekhara Saraswati.

It is the importance given by political heavyweights that has made Saraswati a figure to reckon with. Narasimha Rao as prime minister, R.Venkataraman as president and Ranganath Mishra as chief justice are among those who have bowed before him. There are others too, from across the political spectrum, who seek his blessings.

Striking at a compromise formula for Ayodhya by talking to the AIMPLB, the Ram Janmabhoomi Nyas and the VHP was something the Kanchi head was only too happy to attempt. He was helped in his efforts by the charmed circle consisting of former President Venkataraman, former UP governor Romesh Bhandari and former chief justice Mishra. According to the math sources, it became clear that a beleaguered Vajpayee would use the Kanchi card when defence minister George Fernandes visited the math on February 2 and held confabulations with the Shankaracharya on the Ayodhya dispute.

Though he talked about arriving at an amicable solution and showed that he could command the Muslim community's respect and rise above religion, the Shankaracharya has all along been in favour of constructing a temple at Ayodhya. As recently as June 26, 2001, he said that any verdict of the judiciary against the construction of the temple wouldn't be welcomed. "Ram temple already exists there. The court would find it difficult to change the status quo. Any verdict which is not in favour of the temple construction wouldn't be welcomed." In another statement the same year, he said: "We are of the opinion that a temple should be built there at any cost. That is the aspiration of the majority. How can it be ignored?"

In fact, Saraswati is fond of recalling the role he had played, more than a decade ago, in persuading the then prime minister, Rajiv Gandhi, to remove the locks of the temple.As prime minister, Rao had also asked him to appeal for calm in the aftermath of the Babri demolition. Saraswati has since praised Rao. "Narasimha Rao's tenure was any day better. The way Atalji is functioning is very sad. He can't take even one decision on his own. His hands are tied."

Since the Kanchi math isn't recognised by the other four peethas, Saraswati perhaps feels compelled to go that extra mile to be in the limelight. According to those who know him well, his RSS-VHP friendliness needs to be understood in the context of his exclusion from other Shankaracharya fora. In January 2001, Saraswati was the only Shankaracharya to attend the VHP-backed Dharam Sansad in Allahabad's Kumbhnagar. It was this sansad that set the 2002 Shivaratri deadline for the Centre to hand over the land to the Ram Janmabhoomi Nyas for constructing the temple. A week later, at the same venue, a new outfit, Sanatan Dharma Manch, challenged the VHP's right to construct a Ram temple. The Shankaracharyas of Dwarka and Puri, peethadhishwars, mahamandaleshwars of various akharas and prominent saints formed this manch and expectedly, Saraswati had no role to play there.

According to sources, the Kanchi seer is a reasonably consistent admirer of the RSS and the Shiv Sena. In December 2000, he had this to say about Bal Thackeray's party: "If the Sena is getting aggressive it is purely because it is the need of the times. Even the scriptures recommend this. The Muslims have their supporters in the Persian Gulf, the Christians keep getting big money from the West.... So, what happens to the majority? It is here that leaders like Thackeray who can mobilise Hindus become crucial. If his style is high-handed, so be it. It is necessary." As for the RSS, the Shankaracharya sees it as an organisation that is spreading Hindu awareness across the globe: "The RSS and its frontal organisations act as a generator of Hindu awareness around the world."

With his Ayodhya initiative on hold, the pontiff has not been too keen to talk to the press. For now, Saraswati is content to rest in his cushioned chair, gracing devotees with darshan every morning and evening. However, Vajpayee or Fernandes, if they want to knock at the Shankaracharya's door again, can always jump the queue.