Paid-for sex. It's an integral part of deals struck in Delhi.

Samata Party treasurer (since sacked) R.K. Jain's involvement in the Tehelka sex scandal is the latest example of the sleazy underbelly of Indian politics. Delhi's five-star hotels and the 'safe houses' in plush upmarket colonies are witness to the wine-and-women evenings—considered an essential part of any important deal struck at the highest level. Arms dealers, blackmailers, even intelligence agencies use call girls to good effect. Insiders say womanising is the most popular pastime of some powerful politicians and businessmen who frequent the five-star health clubs.

Twelve years ago, when the Crime Branch of Delhi police busted a flesh trade racket in South Delhi and arrested Kamaljit—still the most notorious supplier of high-class call girls in town—they stumbled upon a long list of clients including bureaucrats, journalists and of course the all-powerful politicians of that time. With their careers destroyed, those from the first two professions faded into oblivion. But there were no full stops for the politicians. One of those who figured prominently in the list of 'clients' then, now holds an important portfolio in the Vajpayee cabinet. 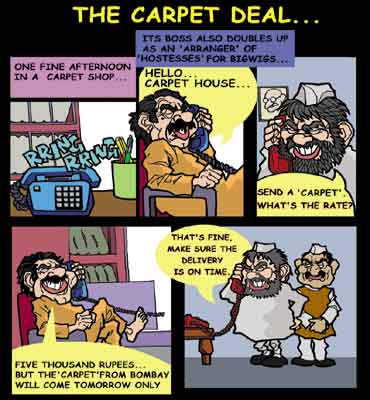 Known for providing hospitality to journos close to him, the politician in question would call up Kamaljit and ask for girls. A call girl who turned approver told the police that both the client and the supplier were cautious enough to use code language. For example, a sex worker would be called a kaleen (carpet). And since Kamaljit ran a carpet showroom in Khan Market, nobody suspected any foul play.

A typical conversation would go something like this: "Ek kaleen chahiye. Kya rate hai? (Send a carpet. What's the rate?)"

It was later revealed that a Pakistani Test cricketer, a prominent Haryana politician's sons, a couple of journalists and a dozen cops were his regular clients.

But the 'use' of women goes far beyond this. Sources in the intelligence agencies admit that setting up an informant using a woman is "an accepted thing" in the intelligence set-up. The Intelligence Bureau (IB) and the Research and Analysis Wing (raw) have several safe houses in Delhi's posh colonies where agents are "entertained". A couple of years ago, raw had a tough time when the residents of Pushp Vihar in South Delhi created a ruckus over "shady women" frequenting a house in the colony. It later turned out to be a safe house, supervised by a raw field officer, meant for offering call girls to agents.

Says a former raw officer: "Offering call girls to clinch a deal has become as normal as having tea or coffee. Undercover agencies use it to such an extent that any big deal without women is considered 'abnormal'." He said at times it becomes an important part of the hospitality offered to visiting foreign dignitaries. It is well known in raw circles that some years back a young lady ias officer on deputation to raw was given the specific task of "giving company" to the king of a tiny neighbouring country. The country is of immense strategic significance to India. Old-timers in the agency even confirm that there was a time when a foreign dignitary's culinary preferences stated in the menu card sent by his country had a column of "habits"—implying sexual habits. That practice is no longer in vogue.

However, defence middlemen still use this modus operandi to please government and army officials.According to an arms agent in South Delhi, expensive gifts, weekend getaways and nights out at five-star hotels are a must. Since the arms deal involves huge amounts of money, such frills are considered almost part of the process. One case the ex-raw officer recounts from the early 1990s is of a defence official insisting on the presence of young girls at a farmhouse party. Incidentally, this defence deal is now under the scrutiny of Central Vigilance Commissioner N. Vittal.