A dispirited cadre, stale issues and a 'triple anti-incumbency' factor 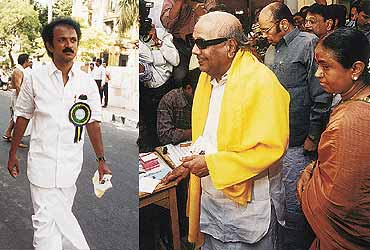 outlookindia.com
-0001-11-30T00:00:00+0553
It is introspection time for the oldest regional party in the country. With Karunanidhi pronouncing this election as his last one, the DMK will have to recover lost ground under a new leader. The last time it was out of power—between 1976 and 1989—it was Karunanidhi's leadership that held the DMK together. But should he decide to take the backseat, can heir-apparent Stalin revive the party?

The metamorphosis of the DMK from being a party working for social justice at the state level to being a participant in national politics has not been without pitfalls. In the recently concluded elections, the dmk had to fight what its leaders describe as triple anti-incumbency. The party was ruling the state, it was part of the NDA government at the Centre and it controlled 70 per cent of local bodies. While the performance of the state government has been praised, the average voter was not willing to give any marks for the central government's economic policies or the functioning of the local bodies.

What ails the DMK? According to old timers, it has over the years become a middle-class party losing its large subaltern support base. Senior party functionaries recall that one of the images which drew youths in droves towards the party was a photograph published in The Hindu in the '60s showing a young man carrying a poor 70-year-old woman on his back to the polling station. But, in this election, the party machinery was so sloppy that even in Chepauk constituency, from which Karunanidhi was elected, less than 50 per cent votes were polled.

Post-poll assessment of the party has it that the DMK's truck with the bjp has hit the former severely. While the dmk found new supporters from among the urban middle class and upper middle class, its rural votebank has been corroded. Also, the economic reforms of the central government championed by DMK leaders like Murasoli Maran gave an anti-poor image to the party. This, say party insiders, gnawed into the dmk's base.

Party leaders also feel that Karunanidhi's idea of propping up his son Stalin has had a negative impact. Stalin made no attempt to create an identity of his own. He shied away from the media and no one in the party was clear about his political beliefs. So when Karunanidhi bestowed decision-making powers on his son, there was much heartburn in the party.

Though opposition to Stalin has not come out into the open, it is evident that he has not been recognised as a leader. Points out a district secretary of the party: "This election was not a contest between Karunanidhi and Jayalalitha, it was between Jayalalitha and Stalin. Jayalalitha, despite providing one of the worst regimes, is a known devil. Whereas Stalin is still to emerge on his own. And that was reason enough for the party's failure."

In the days to come, the focus will be on Stalin. Many senior leaders feel the old guard must give way to younger leaders. But the problem is that the dmk needs all the experience of its stalwarts to bring the party on an even keel and infuse spirit into a disillusioned cadre which is yet to come to grips with their Dravidian party having a tie-up with the BJP.

Unless Stalin realises the enormous task before him, the danger of the dmk losing out its ideological moorings, a la the Congress, will be a certainty.