The 17-year-old and his twin Suresh have just come out with their first book, Conspiracy of Calapsia. Part of a seven-book series, they've been working on it since they were 11. 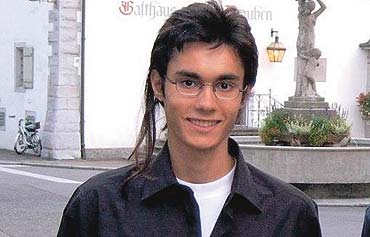 We started it together, and so we will finish it. Meanwhile, between books and sub-series, I will develop my own projects.

Or is it easier to play out the twin factor?

It’s great fun to bounce off ideas. When we started, we wrote together like we did everything else. A solitary job became a lively game.

The last ‘young writer’ of note was Kaavya Vishwanathan. Afraid of comparisons?

No. I think readers would be hard-pressed to find comparable aspects, age aside.

Tell us about your early attempts to get published before finally finding a publisher?

Publishers sometimes sent us personalised rejections which was like doing a personal favour. The rejections kept getting better.

How long have you been growing that strand of hair waiting for the release?

Why fantasy as a genre?

As kids, we didn’t think about genre. We just wrote what we loved and fantasy happened to be what ignited our imaginations.

You auditioned for Viktor Krum’s role in the movie Harry Potter and The Goblet Of Fire. Have you felt close to Rowling’s characters?

One of Rowling’s gifts is for characters. Yes, I have felt empathy for them.

Do any of your characters draw from the Harry Potter series?

Not really. But there are the sorts of characters in the series one finds in most fiction.

How much of your Indian roots are reflected in your writing?

Certain descriptions and character traits would probably be recognised only by an Indian.

How many of the series are ready?

We’re working on Book Two now, which we hope to finish early next year.