Should I quit, I will be denying myself the fundamental right to serve the country.. 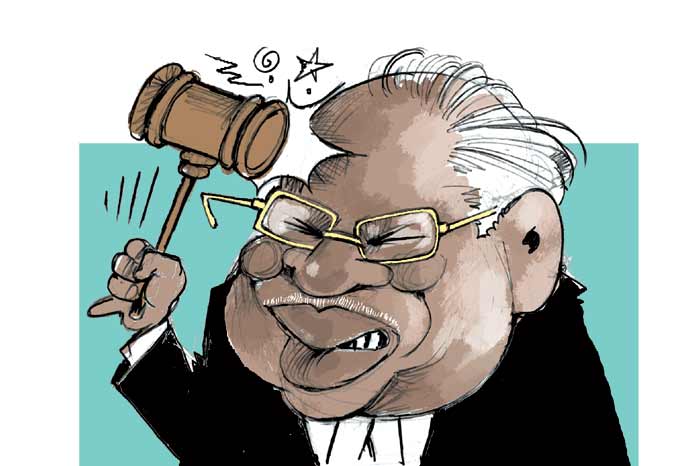 For starters, the New Year didn’t bring good cheer for me or my family. In fact, we have every reason to be upset, what with TV channels and newspapers going on about land scams involving my two sons-in-law and my brother. Now, those levelling these allegations obviously don’t have the faintest idea about the power of persuasion. Let me explain. Let’s say my son-in law, Sreenijan, goes shopping for  vegetables. He gifts his favourite vendor a handful of candy for his son. He then might in return sell him tomatoes cheaper than the market price. Should we then conclude that the discount was given because Sreenijan is my relative? Again, from my own experience, I know my favourite chaatwallah obliges me with few free golgappas (Rs 2.50 each) just because I occasionally gift him copies of my old judgements (which he uses to pack sev puri). Now, tell me, does this make me corrupt? Of course, I admit there is quid pro quo involved. But you can’t say I accepted golgappas as bribe for ‘judgements delivered’.

That aside, let’s examine the allegation that my relatives acquired land at rock-bottom prices in return for favours done. Well, let me say, here too the persuasion principle applies. If you can persuade someone to transfer property at less than the market price, you have every right to buy and the original owner the right to sell. But there will always be those who say that as the kith and kin of the CJI one is expected to offer actual market rates. That is indeed absurd. To quote Dennis Wholey, the American TV presenter: “Expecting the world to treat you fairly just because you are a good person is like expecting a bull not to attack you because you are a vegetarian.”

Forget that. Take a look at the Radia Tapes (still not in the public domain) in which I am supposed to be speaking to the lobbyist. However, the truth is that the K.G. Balakrishnan (aka KGB) that Niira speaks to is her insurance agent. And she was speaking to him about “some important  policy matter.” Thus, when she says, “KGB you have to do something. Time is running out,” the reference is to her LIC premium. But, unfortunately, the commies in Kerala came up with the theory that the reference was to me and that I was a CIA agent masquerading as an ex-KGB operative. Well, my only link to any secret service is that I know Vladmir Putin, the  Russian PM (who once served in the KGB). Years ago, when he was in school in Leningard, and I was a law student, we were penpals. And since both corresponded in a language unknown to the other (he in Russian and I in Malayalam) we never had any misunderstanding. Anyway, after he heard of my recent troubles, his advice (posted on www.vladmir@g-string.com) was: “Buddy KGB, go to the gym. Take on the world and  flex your muscles.”

Finally, will I resign as NHRC chief as demanded by the malicious mob? No, probably not. For, should I quit, I will be denying myself the fundamental right to serve the country....