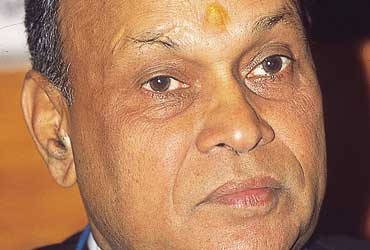 The Shanta Kumar-Prem Kumar Dhumal rivalry, rather than Gujarat, could have a fallout here

In the land of apples and tourism, no one wants a communal riot. It's the last thing on Prem Kumar Dhumal's mind, the BJP CM who faces a tough battle a few months on. It'll be the first poll after Gujarat, but as a senior BJP leader remarks jocularly, "If Dhumal has to engineer a riot, he'd do it against Shanta Kumar!" Former CM Shanta Kumar now holds the rural development portfolio at the Centre. But partymen say his energies are devoted more to unsettling Dhumal. State BJP leaders talk of the fallout of this stand-off and not about terrorism or communal riots.

Maheshwar Singh, the MP from Mandi, does not mince words: "How can Gujarat be transferred to Himachal? There are no minorities in the state, the electorate is highly vigilant and interested in development." The only impact Gujarat's had here, say BJP strategists, is that it has been a shot in the arm. Says BJP leader Sunil Shastri, "After such a big win in one state, the party feels buoyant here."

The fact that Modi was in charge of the state when the Dhumal government was installed could merely transfer the winning touch, say BJP leaders. He'll campaign along with other BJP leaders but 'Mian Musharraf' has no meaning in Himachal, they say. They consider Vajpayee a more useful campaigner and stress the PM makes it a point to vacation in Manali every year. Says Maheshwar, "We hope the amount of development money that has been pumped in on roads and water works will pay off." The BJP's hopes are also pinned on the infighting within the Congress. BJP leaders are crossing their fingers and hoping that anti-incumbency will not work against the party in this election. As for Hindutva, Maheshwar retorts: "It's never worked in Himachal and never will."

In the pretty little hill state at least, no devilish schemes are being hatched, no riots plotted. It will be a run-of-the-mill election.

A Cross For Jogi