Saifai, Mulayam's one-horse hometown, seems to be the capital of UP's development schemes 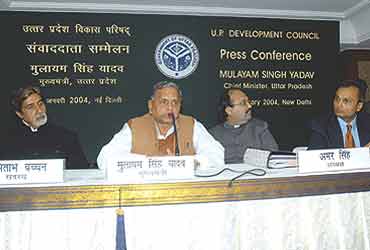 outlookindia.com
-0001-11-30T00:00:00+0553
Had it not been for Uttar Pradesh chief minister Mulayam Singh Yadav, Saifai would have been just another dusty one-horse town. But today it has acquired VVIP status—Mulayam was born and brought up here. And this seems to be the only reason why it is undergoing such dramatic changes, leaving its 25,000 population wonder-struck. Being the CM's home town means being bestowed with some privileges. But everyone agrees no town in India has got as many goodies as Saifai. It has not only hosted bigwigs and celebs but is getting the latest in technology, infotech, healthcare, sports. Why, the town can soon boast of a 100-acre airport large enough to handle corporate jets.

Ever since Mulayam came to power in August last year, the pace of development in Saifai has reached frenetic pace. There is nothing small town about it. Tall concrete buildings dominate the landscape. Modern technology has turned Saifai into a state-of-the-art township with greenery and landscaping that would do any city proud. As a result, Saifai stands in sharp contrast to the typical unkempt UP towns. Mulayam's relatives are overwhelmed. Says his cousin and neighbour, Atal Singh Yadav: "We are ever thankful to netaji. We feel sentimental too as Mulayam has named so many institutions after our kith and kin."

It's development at breakneck speed. In every street, buildings are being constructed. The little township has cranes and excavators working overtime. An engineer from the Uttar Pradesh Rajkiya Nirman Nigam (UPRNN), posted at Saifai, complains: "We barely get to sleep. The minister wants most projects completed by the year-end." UPRNN is handling projects being funded by the state government. On the anvil is a 30-km four-lane road connecting Saifai with Mainpuri, a recreation park and a tourist centre. The government plans to develop a green belt cover alongside the highway, including eco-forestry and cultivation of medicinal plants. The plans are impressive but one wonders which tourist will include back-of-beyond Saifai on his itinerary.

Money for these projects has already been sanctioned and the administrative machinery is trying to complete these in record time. Chief Secretary V.K. Mittal has the task of reviewing and reporting on the development of Saifai. At any time, the town is teeming with babus from Lucknow. The word has gone out that if one wishes to be in the good books of the CM then he must show his concern for Saifai.

A walk down Saifai will convince you that Mulayam believes in immortalising all those close to his heart in concrete. So there is a Dr Ram Manohar Lohia hostel which can accommodate 300 students. A little distance away stands the Sughar Singh Memorial Public school, an imposing building in red named after Mulayam's father and affiliated to the CBSE. The CM recently cleared the construction of a multipurpose hostel for the school. The hostel will also have special accommodation facilities for visiting guardians.

A little further down and very close to the chief minister's ancestral home, the Amitabh Bachchan Intermediate College is coming up. But for institutions named after MGR in Tamil Nadu, this will perhaps be the only government-run educational institution in India named after a living film star. The state government has allocated Rs 8.6 crore to build an auditorium for it. Says Rajendra Yadav, a teacher in the institution: "We understand that the auditorium is going to be built according to Mumbai standards and will have a capacity for one thousand people." With Mulayam holding festivals in Saifai and inviting Bollywood stars, such an auditorium was seen as a necessity. The bill, of course, will be footed by the state exchequer.

Though it already has an airstrip, Saifai will soon have a full-fledged airport. Railway India Technical and Engineering Services (RITES) has been engaged to upgrade the strip, 10 km from Mulayam's residence.According to local tehsildar Arun Kumar Shukla, the airport will extend over a stretch of 100 acres. After the upgrade, which will take two years, it will be fit for jets to operate. Vimlesh Kumar, who has a tiny tea stall in front of the airstrip is hopeful of raking in money soon. "I started this dhanda (venture) since I heard that one day there'll be a huge airport here."

However, villagers living in the airport zone protest that most of their land will be acquired by the government when work begins. Land will be carved from Bhagipur, Bhowanipur and Nandpur villages for the extension of the airport. Most villagers around Saifai are unhappy with Mulayam. They complain that while Saifai enjoys uninterrupted power and water, they barely have any supply. No other town or village in the state gets such special treatment. Laments Ram Kumar Yadav of Sahsarpur, a neighbouring village: "We've no power or water. In fact, all the adjoining eight villages here are steeped in poverty."

Mulayam's Saifai fixation has come in for much criticism in political circles as well. Says former UP chief minister Rajnath Singh: "Very soon the people of UP will start questioning Mulayam Singh's development of his home town. This time he seems too obsessed with Saifai. As chief minister, he should look at the all-round development of the state and not that of Saifai alone." Even the Congress, which is supporting Mulayam's government, has raised objections. Says CLP leader Pramod Tiwari: "It is always good to develop one's constituency but the CM has gone a step ahead and seems obsessed with his hometown. He is concentrating on infrastructure which is never going to be of any use to the common people. Besides, a lot of money, time and power is being siphoned to Saifai which could have been put to better use." Some Congressmen joke that the UP Development Board should be renamed the Saifai Development Board.

But Mulayam is unfazed. He is going full steam ahead to make Saifai a 'model town' for the rest of the country. The CM certainly believes that charity begins at home. Just outside his ancestral home is a small lake, which Netaji decided needed attention and money. In quick time, Rs 2.28 crore has been sanctioned for the beautification of this water body.

Saifai is where Mulayam's guests from the film and corporate world are entertained. Last December, the 10-day Saifai Mahotsav was a grand affair featuring the leading lights of Bollywood. The guests were impressed by the development activities there. They would be further impressed when the airport comes up. It's another matter that Saifai is a feel-good island surrounded by a sea of poverty.