Just For A Lard

Thukral has attemped to follow in the footsteps of Swift and Orwell by writing a satirical allegory, and he has failed. 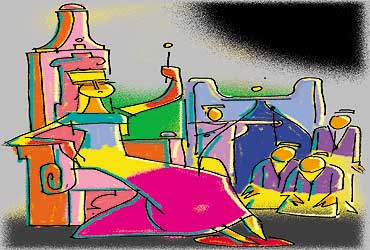 Allegorical novels are not easy to write. This may explain why very few people write them. Offhand I can only think of two authors who have done so successfully. One was Dean Swift, who wrote Gulliver’s Travels. The other, George Orwell, produced Animal Farm and 1984. The two men inhabited different centuries. They were alike in that they both suffered much hardship and illness in their lives. This embittered Swift. The human weaknesses he raged at in the 18th century were exactly the same as those that Orwell attacked 200 years later; but Orwell was a committed liberal, and a gentler person than Swift.

The Chronicler’s Daughter is a first novel. Its author, Kishore Thukral, is 40 years old, and an investment consultant. As a profession, this would have equally repelled Swift and Orwell. Thukral has attempted to follow in their footsteps by writing a satirical allegory, and he has failed. This kind of book, to be at all successful, requires a light, deft touch and a style that contains what is now called black humour. This, in the two masters,...