Just A Little Grease To Oil The Ship 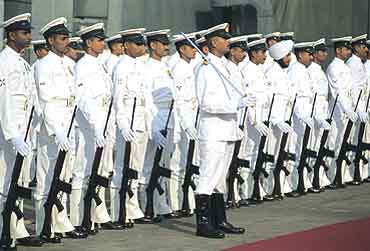 Defence scams, one would think, are a nexus between international arms agents, politicians and senior officers, and involve crores in kickbacks. But a few recent cases in the Indian navy reveal that senior officers stoop to abysmally low levels for just a few thousand rupees. They have been pocketing small change from contracts for underwear, shoes, uniforms, caps, shoulder stripes and suitcases. And they include a naval commodore (equivalent to an army brigadier) currently serving time in Nasik jail for such petty acts of corruption, and four other officers facing court-martial on similar charges.

When the bell rang on June 16, 2003, at 1.35 am at the Depot House in Mumbai's naval establishment, Commodore N.M. Pandit, the materials superintendent of Mumbai's western naval command and the seniormost logistics officer, had just got home. He and his family had gone to see Ram Gopal Varma's Bhoot. Within minutes of reaching home, two officers, with the authority of Admiral Arun Prakash, the present naval chief, and the then chief of western command, searched Pandit's house. They seized his briefcase, cheque books, fixed deposit receipts and bonds. They also took Pandit away.

Subsequent investigation resulted in a chargesheet being filed against Pandit by the navy on October 9, 2003. His guilt proven, Pandit is now in Nasik jail for accepting bribes—Rs 1,40,000 from Safari, the suitcase manufacturers; Rs 25,000 from Hemant Engineering Works, Thane, for davits (equipment with a tackle used for raising and lowering lifeboats), Rs 15,000 from lifejacket manufacturers Raksha Polycoats, Pune; Rs 8,000 from computer stationery suppliers; a laptop computer from Acer India and Rs 20,000 from paint manufacturers.

The Safari case happened when Pandit was director of clothing and victualling in the naval headquarters at Delhi. Since he was expected to examine the consignment, he flew down to Mumbai on July 6, 2002, with the release order for the suitcases. He was taken from Mumbai to Vadodara by flight and put up in a hotel by the suppliers. But when the officer returned to Delhi, he did not forget to claim Rs 4,680 for his taxi fare from Mumbai to Vadodara and also his daily allowance. When he repeated this journey in August to examine a second lot of suitcases, he however did not give the release order to the firm. On his return, he told the company's representative, K.S. Subramanian, to pay 2 per cent of the Rs 67 lakh the two consignments were worth. Thus, on August 19 that year, Safari's Manimoy Sarkar met Pandit at his Arjun Vihar residence in Delhi and paid Rs 1.40 lakh. Sarkar got the release orders for the suitcases two days later at the outer gate of Sena Bhawan.

When Pandit was posted in Mumbai, possibly recommended by the then controller of logistics, Vice Admiral Barin Ghosh, he put in place a well-oiled network of graft: a group of officers, with one pointsman to actually receive slush money and three accomplices. The chargesheet against Lt Commander M.P. Verma, who was part of this gang of four, involves the sundry clothing items that the navy sources from time to time. He is alleged to have taken Rs 5,000 from Om Prakash Toshniwal of Arjay Apparel Industries Ltd, Mumbai, that supplies vests and briefs to the navy; Rs 2,00,000 from Reliance Industries' product promoter Rakesh Mehrotra who supplied cloth for uniforms; Rs 1,00,000 from shoe manufacturers Lakhani Industries, Faridabad; Rs 10,000 from Sola Hat Works that makes peak caps and shoulder stripes; Rs 10,000 from Equiptronics for electrical and electronic items; and Rs 50,000 from suitcase manufacturer Safari.

But the bribe-givers whom the navy used to nail its officers have been let off. In fact, they continue to supply the navy with materials and probably still grease palms to bag contracts.The navy has not responded to Outlook's query whether it has blacklisted the suppliers who on oath admitted to bribing its officers.

In fact, it is learnt that during Verma's court-martial in April-May last year, Safari's representative Subramanian admitted his company still did business with the navy and had an ongoing Rs 24 crore worth of business with the canteen and stores department of the armed forces. Interestingly, Vijay Singhal of Ms Computer Stationery, who too had bribed the officers, even claimed that the question of blacklisting does not arise as he is not involved in any corruption case.

The fact that the bribe-givers were let off is a manifestation of the rot. Pandit's boss Barin Ghosh was earlier accused of making ship chandler purchases from middlemen instead of original equipment manufacturers or indigenous sources while he was posted as materials superintendent at Visakhapatnam's eastern naval command. The whistleblower in that instance, Rear Admiral Suhas V. Purohit, alleged that ship chandler purchases were so skewed that a flange worth Rs 3.5 and hexagonal screw worth Rs 16 in India were imported for Rs 1,64,712 and Rs 15,240 respectively. Purohit, slated to become the controller of logistics, was sidelined and a flurry of charges hurled at him. A cbi inquiry later exonerated him. Meanwhile, Ghosh was promoted.

After the Central Vigilance Commission found that most of Purohit's allegations were correct, the navy was forced to hold a board of inquiry against Ghosh last year. Apparently, he was indicted on one of the several charges levelled by Purohit. But the navy is mum on the board's report and Ghosh retired a few months ago.

Ghosh's successor, the incumbent controller of logistics, V.S. Mathur, and other senior officers in his department were earlier indicted by a board of inquiry in what is known as the 'chiller case'. Chiller is a vital component in an air-conditioning plant, one of which malfunctioned on the INS Gomti. An inquiry revealed that the loss to the navy of Rs 12 lakh was the result of substandard equipment that was procured. According to sources, a letter issued by the navy's director of personnel suggested the possibility of illegal gratification and a nexus between the suppliers and the officers. The navy failed to respond on why it has not acted on this letter.

The logistics department, with a Rs 4,500 crore annual budget, is just a supporting arm of the navy. And logistics officers point out that apart from uniform and similar stores, around Rs 2,000 crore is spent on engineering spare parts and over Rs 750 crore on fuel. "Engines, alternators, air-conditioners, radar, pumps: these are the high-value items which are decided by the executive branch. That is where the real scam lies," says a logistics officer.

The scam, it seems, lies everywhere. Like tribal leader Shibu Soren, who allegedly put his slush money in a savings bank account, Commodore Pandit, according to the navy, kept his loot in several savings accounts, including one in the South Block (which houses the defence ministry and the PMO) branch of Syndicate Bank. The fault, obviously, lies in the system. Unless there's an overhaul and more credible monitoring, corrupt officers will continue to milk the system.