The badland backdrop lingered. Until both sides got to know the face behind the image. 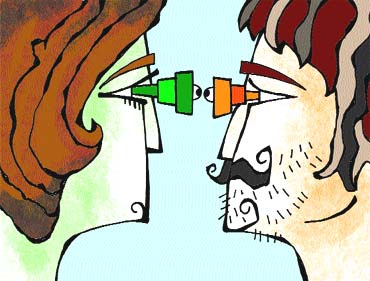 outlookindia.com
-0001-11-30T00:00:00+0553
Twenty-three years ago, I was on my way to Barheta, a small village in northern Bihar. Kashyapji, the grassroots activist heading Bharati Vikas Manch, the Madhubani group with whom I was to work, had offered to pick me up from Patna station and accompany me. It was a long, convoluted journey, with several bus changes. Bihar, then as now, was notorious for its corruption, chaos, and violence. I scoffed; I had been travelling all my life.

Reeling and nauseous from the crowded, rattling eight-hour bus journey; the incessant shrill horn vying with a blaring video version of one of Sridevi’s raunchier roles, I rehearsed Kashyapji’s instructions: "When you reach Darbhanga, take the bus to Laheria Sarai. Then walk to the jail corner and get a cycle rickshaw to Barheta. It’s a 40-minute journey...."

Here was Laheria Sarai, here was the jail, and here were the rickshaws. However, an officious fellow-traveller barred my way. "Where are you going? Barheta? You can’t go by rickshaw. It’s very far and already evening. You are a woman and this is dacoit country. Here, that bus is going to Barheta...." Ignoring my expostulations, he picked up the big bundle I was carrying (cloth for the Madhubani craftswomen to paint on), and flung it through the nearest window. The bus was on the move. Perforce, I had to follow my belongings!

Two hours later, the bus stopping every two minutes to collect and deposit passengers, baskets of chickens, even a goat—we seemed no nearer our destination. Finally the bus ground to a halt, and the attendant waved me off. "Barheta there," he said, gesticulating to a small footpath meandering though the dense forest. I shouldered my bundle of cloth, picked up my case, and set off. By then it was past 8 and dark, the path ahead barely visible. An occasional villager, returning from work, answered my increasingly anxious queries on the elusive place called Barheta with an affirmative thumb pointed onwards.

Another 20 minutes on, lights ahead suggested reprieve. A couple of hurricane lamps illuminated a clearing with three or four charpais and four or five burly men. Closer inspection revealed bottles of booze and that the men themselves were fairly tanked up. Thick handlebar moustaches and an inebriated swagger added to a totally filmi version of thugs. They were as astonished as I. A manicured urban woman, dressed in handcrafted churidar-kurta, wandering through the jungle with her luggage, was unexpected evening entertainment.

Chief Thug rose to his feet and peered into my face: "Where are you going? Where have you come from? What is your business? What is in your bags?" The rank smell of country liquor and sweat was displeasing. I was anxious to be on my way. But it was obvious that my story of coming from Delhi to work with village women didn’t cut much ice. They hadn’t heard of Mithila painting, let alone Kashyap or Bharati Vikas Manch. They came from Barheta and there was no such thing there. Thug Two turned Kashyapji’s letter this way and that—I wasn’t even sure they could read. Their attentions were becoming oppressive. A leer that was more than just liquor, a familiarity on the border of obscene.

Suddenly, Chief Thug seized the letter and let out a loud guffaw of Bollywood villain laughter, "I know what has happened.... You want Barheta Ghat, this is Barheta Gaon," he chortled. "Are you sure?" I asked, "and where exactly is Barheta Ghat?" "You will have to take a bus back to Laheria Sarai and go from there. Ha, ha, ha..." I was reluctant to believe the bad news. Another wearisome journey to Laheria Sarai was a nightmare. "Are you sure? I’ve just come from there. I hope you aren’t tricking me?" The word suddenly inflamed them. "Tricking you? Do you know who I am," roared Chief Thug, arms akimbo, giving his moustache an extra twirl. "Of course I don’t," I retorted crossly, "how could I? We have only just met."

"We are RSS cadre members and I am the leader," was the not very reassuring reply.

I sat down on my suitcase and started laughing....

People ask me how I could be so stupid. It was honestly a knee-jerk reaction. I was tired, I was fractious; more than a bit apprehensive of escaping this cordon of large, drunk, increasingly tiresome men, whose intentions seemed dubious at best. Both my virtue and possessions seemed at risk. This supposed reassurance was simply the last straw!

My giggles turned eve-baiting into anger. "Why are you laughing?" Chief Thug thundered. The others drew nearer aggressively. "It’s the way you said rss as a certificate of good conduct. But I am a Muslim, the rss aren’t very fond of us...."

The word ‘Muslim’ was instant magic: it turned these looming, lecherous, unpleasant men into lambs. "Are you really a Muslim? Then why have you come to teach Hindu village women?" "Anyway, now you are our guest tonight. We will take you to my grandmother’s house and you will eat dinner and spend the night. Tomorrow, we will take you to Barheta. But why can’t you simply work in our village?"

I protested that I must get to Barheta that night. Kashyapji would be having kittens at my non-appearance (that era, pre-mobile phones!). So Chief Thug put me on the pillion of his bicycle; Second Thug took my suitcase, Third Thug my cloth bundle, and we pedalled first to Dadi’s house for tea and "biskut", and then to the bus-stop. By then, it was 10 and the last bus had left. The four burly men, now friends for life, linked hands and stood across the road, stopping traffic. A jeep stopped, they jumped in, telling the bewildered driver to head for Barheta. The magic incantation of "rss cadre member" silenced his protests.

At Dadi’s cottage (overlooked by a large moustachioed print of Balasaheb Deoras) en route to Barheta, Chief Thug confessed wistfully that I was the first Muslim woman he had ever met. Apparently I didn’t fit his demonised image. "Why are we told Muslims are bad?" he queried, "And what makes you fear the rss?" "Why does your leader want to deport us in trucks to Pakistan?" I retorted. "It’s all because we don’t really meet and know each other." I gave them a mini-history lesson—a revelation to them that many, many Muslims (including my great-grandfather) had bitterly opposed Partition, and that millions of Muslims (including my entire family) had consciously chosen India over Pakistan. Over chai and and biskut we decided politicians were mad.

Journeys can be defining moments. For me too, that encounter was a revelation. How prejudice (and alcohol) can be wiped away by a chance word. How a meeting can alter a mindset. The memory has stood me in good stead over the years.