Jumbo On The Road 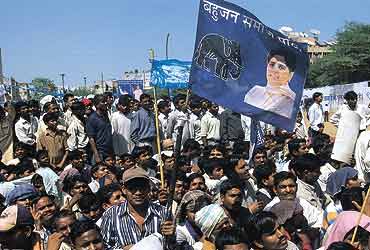 outlookindia.com
-0001-11-30T00:00:00+0553
The state government resthouse in Nagpur was recently the scene of a flurry of activity. Qualises and Ambassadors fought for space, two-wheelers came with their own rapidity. Politicians in white khadi streamed in and out of the largest suite. The hangers-on lingered in the corridors. A scene straight out of any Congress leader's visit to Maharashtra's second capital? Only, this time it wasn't the Congress; it was Mayawati's Bahujan Samaj Party (BSP) making its presence felt in Maharashtra, a state where almost no one had given her a chance. State BSP leader Vilas Garud was camping at Nagpur that night.

In politics, little things are indicators of which way the wind is blowing. The BSP won a handful of seats in the Nagpur municipal corporation three years back. Leaders of the Congress and Sena-BJP paid scant attention, blaming it on a combination of local issues and political arithmetic. Mayawati doesn't stand a chance south of the Vindhyas, they said then. Now, the Congress and Nationalist Congress Party (NCP) are at their wits' end wondering how to grapple with the Mayawati factor.

This April, Mayawati addressed only two rallies in the Vidarbha region. In the 11 Lok Sabha constituencies there, her candidates took home anywhere from four per cent to 13.3 per cent of the vote. Clearly, BSP candidates played spoiler for the Congress-NCP, which lost 10 seats to the Sena-BJP within 5,000-vote margins. Importantly, in each case, the BSP amassed more votes than the victory margins. Take Union civil aviation minister Praful Patel's election in Bhandara. Known as the beedi king, the NCP leader's election was as good as done when he filed the nomination. He lost by 0.4 per cent votes, BSP's Ajab Lal taking away 13.32 per cent. The BSP's impact was the strongest in Vidarbha but even north and western Maharashtra were not immune where BSP candidates picked up 1.5 to 3 per cent. Across the state, Mayawati's party took just under three per cent of the total vote.

Within the Congress and NCP, there is much confusion on whether they should tie up with Mayawati for the forthcoming assembly polls. The top leadership in both are divided, one half saying an alliance is vital to contain splitting of votes in Vidarbha and Marathwada. But an alliance with Mayawati would mean jettisoning the Republican Party of India (RPI). Party boss Ramdas Athawale will surely walk away and that will also seal chances of any other factional leader coming over. "We have yet to decide on alliances," hedges pcc chief Prabha Rau. Hailing from Vidarbha where she lost the Wardha LS seat, Rau understands the BSP factor but can hardly decide alliances herself. The BSP itself isn't worried. "We'll go by what our leader says. We may even fight all 288 seats on our own," says Garud.

So is the Dalit vote up for grabs? Traditionally, the Dalit vote has been split between the Congress and RPI. The RPI has split more times than anyone can recall. It now has nine factions but the leaders who count are Prakash Ambedkar, Ramdas Athawale, R.S. Gavai and Jogendra Kawade. The past also has few answers. The Congress has dumped many an RPI faction when it suited them.

Though both parties claim Ambedkar's legacy, there is a clear difference between the RPI and BSP. The latter has something the RPI sorely lacks, a ruthless and visible leader: Mayawati. The party also offers an alternative to young Dalits and OBCs who say the communities have suffered because of the personal egos of RPI leaders. Till recently, the BSP office in Mumbai, a stone's throw away from Victoria Terminus, was a muggy, nondescript place. Hardly anyone visited, few even knew this was the BSP office. Of late though, small crowds have started gathering, activists come from outside Mumbai keen to set up a unit in their village or bring over their support base to the BSP.Vilas Garud is a busy man these days, touring and talking all the time. It's almost as if his moment in the sun is just around the corner.