Judgement Day Feast For The Shah Of Shahs 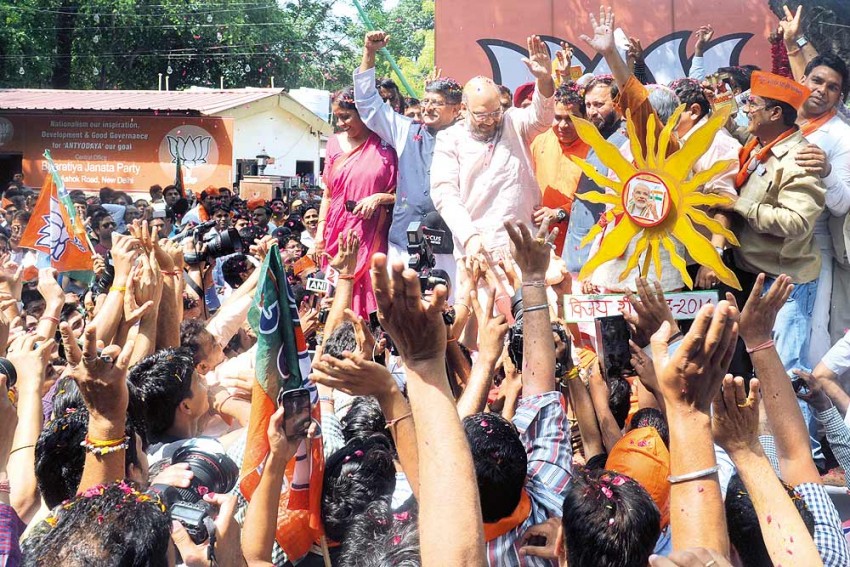 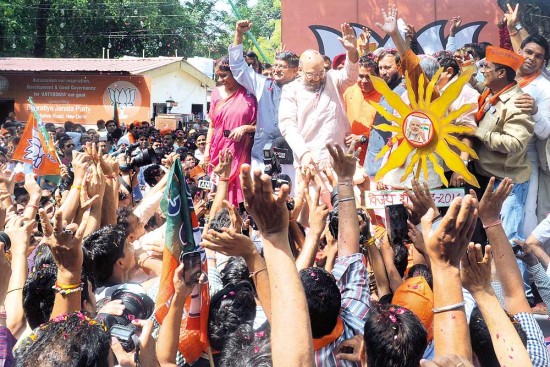 As Narendra Modi swept India, riding the crest of a wave that outdwarfed  surfs near and far, his aide and loyalist Amit Shah would have been exultantly surveying newly conquered territory.

Simply speaking, if the 2014 polls were about the unmatchable mojo of Narendra Modi, then it was also equally about the might and electoral acumen of Amitbhai Anilchandra Shah. Fourteen years Modi’s junior, yet a man for all seasons for him, Shah has resolutely delivered every time Modi banked on him—from ensuring L.K. Advani’s first electoral victory from Gand­hinagar to transforming a crumbling organisation in Uttar Pradesh into a trailblazing juggernaut. Indeed, Shah in UP has given the BJP more seats than the Congress has won in India. Six months back, when Modi demanded a Congress-mukt Bharat, Shah literally made it his mission to do so.

As the BJP general secretary and UP cam­paign-in-charge, Shah had arrived in Lucknow about a year back with a motley group of aides assigned to him by the party with the clear brief—the state had to be won. In the decades after the Ram mandir movement, the BJP had not just lost its grip on UP, but finished a miserable fourth in 2009, winning 10 out of the 80 seats. It was an uphill task, and one he could not afford to fail at, for UP held the key to the party’s goose march to Raisina Hill.

Shah started with the basics. He stren­g­thened organisation at the booth level, setting up booth committees that could exe­­­c­ute a door-to-door campaign. By Feb­ruary end, Shah had personally covered 76 of the 80 LS seats. Innovative ideas, like 450 mobile video vans, had been pressed into service to take Modi’s message to the masses in media-dark zones. Mean­while, a massive UP tour had been worked out for Modi, with Shah insisting on the masterstroke of his candidature from Varanasi.

While the turnaround in UP may be turned into electoral folklore, as Modi’s trusted backroom manager, Shah brought about key decisions that worked in favour of Modi. Highly placed sources tell Outlook that “Amit Shah perhaps was the most critical element to Modiji’s campaign. After all, it was Shah who convinced Modi of the RSS’s participation in the polls as the BJP’s campaign tool on the ground”. He also impre­ssed upon Modi that “he must accept the RSS as the mother ship”. Clearly, the RSS’s relentless groundwork paid rich dividends.

Sources confirm that Shah worked hard to smoothen ties between Modi and the RSS. Shah worked with RSS state prabharis, and ensured BJP leaders met them regularly during the campaign, not just to get ground reports but also to prepare and tweak strategy as the polls progressed. Sangh and BJP leaders met over 100 times during the polls, even at the state and district levels. A Sangh pracharak confirmed, “Amit Shah personally held meetings with Sangh seniors Bhayyaji Joshi, Dattatreya Hosbole, Suresh Soni, even Mohan Bhag­wat, convincing them why Narendra Modi should be the PM candidate. Once the Sangh was con­vinced, things fell in place.” With the RSS approving Modi’s PM candidature, Shah had at one go neutralised the demurring BJP top brass in Delhi. Finally, it was the ‘one leader, one face’ that the party had to back. Clearly, Modi’s stupendous campaign and triumph owes much to this resoluteness.

Shah had a hand even in shaping that image. At a meeting on March 7 at a senior party leader’s residence in Delhi, Shah opposed every suggestion to “present a softer image for Modi” and rejected the “slow dilution of his hard Hindutva image in favour of only a development wizard”. Modi and Shah had been told that both internal surveys and media reports argued for a softer image for Modi. Shah stood his ground. “Modi’s machoism is his USP. We can’t lose that,” he said. Forty-eight hours later, over 5,000 Modi hoardings were put up all across India. They spoke of a decisive, leader who wouldn’t pull his punches.

While Shah focused on the ubiquity of Modi’s larger-than-life image, sources confirm that he put his foot down on several strategic issues, even against Modi’s wis­hes. One of them was the clever ploy to attack prospective allies. While earlier Modi appeared to be praising TMC chief Mamata Banerjee, Shah insisted on the high-stakes tactic of “a Modi-versus-all campaign”. A regular barrage of criticism was kept up at probable allies like the BJD’s Naveen Pat­naik and Mamata. “With a Modi-versus-all campaign, we brought the focus solely on Modi. That one idea did more for us than any campaigning we could have done. Modi’s unquestionable superiority to all other leaders was established,” says a source. Surely, with Mamata and Patnaik in the crosshairs, the Modi-Shah combine scuttled a probable East India bloc.

In UP, Shah not just hand-picked candidates but delayed the process to ensure that the individuals remained less important than Modi. Compulsive voter registration at the booth level by party workers, emphasis on roping in young voters and Hindu consolidation were other focus areas.

For now, the “aggressive, decisive, nocturnal politician”, as his team describes Shah, has not only managed to put Snoopgate behind him, he has also moved on from May 16. His new project “is to spread the party geographically and win all six assembly elections next year.” Also on the wishlist:  BJP regimes in UP, Bihar, Haryana, Jhar­khand, Maharashtra and West Bengal. That would give the PM unmatched clout. The ardent Hanuman bhakt is only doing what his deity would have done for his master.