A Benazir-Sharif front. But they mustn't jettison the judiciary. 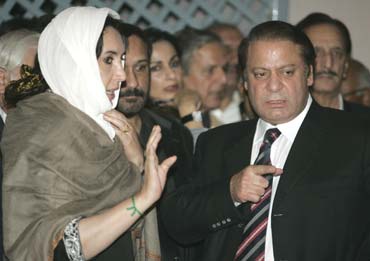 This is the nub of the confusion gripping the Opposition: should they participate in the elections in the hope of checkmating Musharraf at a later date or focus their energies on bringing about a more enduring change in the country?

There are already portents of the change Imran is talking about. Pakistan's civil society isn't mollified because Musharraf has become a civilian president and called for a general election. Lawyers continue to strike work for a few hours daily; journalists and concerned citizens regularly walk the streets demanding the reinstatement of the deposed judges. For the first time in the recent history of Punjab University, its politics is being dictated by students espousing moderation and modernity—and not the Jamaat-e-Islami's student wing. Even the campus of the prestigious Lahore University of Management Sciences, usually considered politically apathetic, has been buzzing with campaigns against Musharraf, provoking authorities to issue showcause notices to students and faculty members for disturbing the law and order.