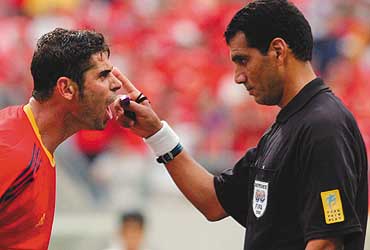 outlookindia.com
-0001-11-30T00:00:00+05:53
Accusations and denials, claims and counter-claims: World Cup 2002 has been embroiled in a different kind of controversy as the standard of refereeing plumbed the depths. South Korea progressed to the semi-finals, the best an Asian nation has ever done in the 72 years of the Cup, but doubts remained thanks to the refereeing foul-ups perpetrated in the co-host's victories over Italy and Spain. The ire against the referees climaxed with FIFA being bombarded with 4,00,000 e-mails objecting to the refereeing in the second-round match between South Korea and Italy; and indignation in Spain and Argentina. "This World Cup should be declared null and void," screamed a headline in La Nacion, an Argentine daily.

That's an exaggeration. But both Italy and Spain had a point when they suspected the officials were against them as both were on the receiving end of some dubious decisions. They should, however, take comfort in the fact that such error-strewn performances have become a feature of these finals.

Ironically, it was the showing of Korean referee Kim Young-joo which set the tone. He became overexcitable in Brazil's match with Turkey in the group stages. Kim, known for his erratic style, went over the top, awarding Brazil a penalty for an offence committed outside the area and sending off two Turks in the last seven minutes.

And they soon found themselves in good company. Belgium, Portugal, Italy and Spain were all berating the referees when they were knocked out while the US, too, were unfortunate as an oversight by officials denied them either a goal or a penalty during their quarter-final defeat.

The furore over Korea's seemingly assisted progress reached such a crescendo, the FIFA issued a statement denying accusations that the decisions were part of a conspiracy to keep the co-hosts in the tournament longer. Anyone who knows anything about FIFA politics can safely say the body is so divided that such a theory is ludicrous.

The real problem lies in the officials appointed and their ability—or the lack of it—to handle big-name players and the intensity of the surroundings at the world's most-watched sports event. Mistakes were made in matches involving Korea, primarily, because the atmosphere at games involving Guus Hiddink's side was the most intimidating. With an almost frightening nationalistic fire burning inside them, the Korean fans turned venues all over the nation into patriotic cauldrons. Inexperienced officials would, understandably, be affected.

And so it proved. But with FIFA selecting officials from nations such as Uganda, Trinidad and Tobago, and Egypt to adjudicate, the governing body is culpable in many ways. Why select officials from nations that don't even play football professionally? Because the body's internal and continental politics dictate policy ahead of what is truly good for the game.

While the world's top professional teams play in Europe and South America, officials from nations such as the Maldives, the UAE, and Antigua and Barbados have been selected to control games. That's not to say that some are incapable of taking control. They are and the proof has come in the performances of referees like Ali Bujsaim from Dubai, a city not exactly famed for the strength of its football league.

But characters like Bujsaim are an exception and FIFA president Sepp Blatter publicly accepted as much. "The refereeing has been the only negative aspect of this World Cup," Blatter said."The (referees) have been quite good, but the (linesmen) have been a disaster, especially when it comes to off-side...they haven't even realised that it is better to award an off-side goal than to disallow a good goal. A World Cup that receives the best players and teams in the world should be overseen by the best referees regardless of their nationality...from now on we will call in the best, full stop, even if they come from just a handful of countries."

Blatter's thoughts, though, have not been shared by all concerned. Edgardo Codesal Mendez, a member of FIFA's referees committee, defended the referees. "We'll have to wait until the final to evaluate the whole tournament, but until now the referees in general have done a very good job," he said. Senes Erzik, chairman of the FIFA referees committee, also dismissed the allegations, although he did acknowledge that bad calls have been made at Korea-Japan 2002.

So, where do FIFA and world football go from here? Professionalism is the next obvious step in a sport where players are earning up to US$150,000 a week for their services, yet many officials continue to work in either an amateur or part-time capacity. Only two of the 36 officials consider themselves professional referees with the rest culled from professions such as accountancy and the civil services.

Then there is the thorny issue of technology. Debates over the use of video replays, 'magic eyes' and the like have floundered time and again. With television replays picking up every action and reaction by players and officials, more mistakes are going to be highlighted. And with interest in the game greater now than at any other time in history, the reaction to perceived errors will always be more vociferous. Add to that mix the massive sums of money paid by sponsors to players and national associations, the onus to succeed—or to at least not be held accountable for failure—increases.

The system does need to be overhauled. FIFA has to stop promising action and be seen making positive moves. It needs to do this, as its own motto states, 'For the Good of the Game'.