Take Lagaan and Koi Mil Gaya, mix them, garnish with Tees Maar Khan and a handful of loud Priyadarshan comedies and voila! 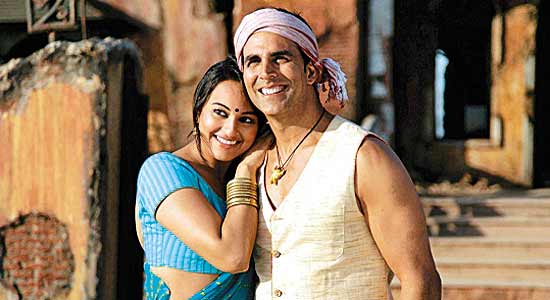 Take Lagaan and Koi Mil Gaya, mix them well and then garnish with Tees Maar Khan and a handful of loud Priyadarshan comedies and voila! An unappetising movie is ready to serve. Shirish Kunder’s Joker has very little that we haven’t seen before. It follows a predictable track, expecting suspension of disbelief from the audience at every plot turn. Which might have been fine, had the film offered us some undiluted entertainment, fantasy and magic. Unfortunately, it doesn’t deliver. No surprises, no novelty, no freshness here.

Joker is set in the imaginary Paglapur, a place inhabited by demented people, the kind who cut the very branches they are sitting on and swing on trees like Tarzan on acid. Paglapur has been forgotten by the administration in post-Independence India. One of its citizens, Agastya (Akshay Kumar), who works as a scientist at NASA (suspension of disbelief alert!), comes calling on his ailing father and decides to stay on and battle it out to bring Paglapur and its problems to national notice. Another suspension of disbelief element: Paglapur has no bijli, but laptops are charged rather miraculously.

The ennui and boredom inherent in the film are reflected in Akshay’s automated performance. Sonakshi is fast emerging as the industry’s favourite, clueless arm candy. What’s unpardonable is how Joker also manages to waste some genuine talent. I have already forgotten who Sanjay Mishra and Pitobash were in the film. In fact, why were they in it at all? What made Chitrangda Singh so desperate for an item number like Kafirana? Shreyas Talpade thinks he is being loveable on screen while he comes across as nothing more than idiotic. His exaggerated gibberish is as irritating as Tushar Kapoor’s in Golmaal. Then, there’s Minisha Lamba, deliberately shoved in as his love interest, who has to be the most passive TV journalist ever known to humankind, not willing to move an inch to get a story. The music by G.V. Prakash Kumar, the nephew of A.R. Rahman, is nothing to write home about. If you dig inane, infantile humour, like a character who translates Hindi to English quite literally (baal baal bache becomes hair hair remain), then you just might like Joker. Otherwise, yawn away—at home.