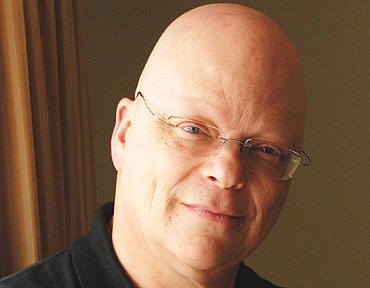 So, an Indian debut with a Malayalam film?

I was offered to compose music for Aakashagopuram by the director and producer. They wanted an international flavour to the music with a universal appeal.

It must have been a totally different environment.

The processes remain the same everywhere. The work was carried out at a highly professional level. I have given music to a dance number as well! Everything progressed really well.

Absolutely! Television has played a vital role in it. Bollywood is reaching Hollywood. I’m sure I’m first of the many who’ll come to India.

Do you see Indian musicians composing for foreign films as well?

I don’t see why not! It’s only a matter of time.

I love A.R. Rahman’s music. Among the classical maestros it is Pandit Ravi Shankar and Ustad Amjad Ali Khan.

Any Indian musical instrument that interests you?