The regent of Poes Garden returns, using her understanding of electoral arithmetic and the confusion in her opponents' ranks 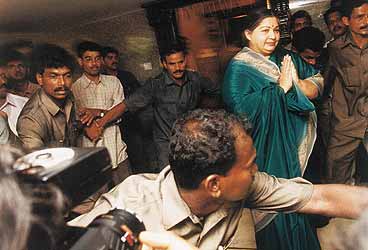 outlookindia.com
-0001-11-30T00:00:00+0553
Tamil Nadu has done it again. While pollsters and political pundits alike were expecting an aiadmk win, the magnitude of that win came as a complete surprise. Within an hour of counting beginning on May 13 it became clear that Jayalalitha was back with a bang and that those who were predicting a photo-finish had got it wrong. Outside the Puratchi Thalaivi's Poes Garden residence, jubilant supporters danced with joy. The sycophants were there in good numbers saying that god had heard their prayers—Amma was back.

And yet it was these very voters who'd prevented her motorcade from entering their localities in the build-up to the 1996 elections. Jayalalitha was then the arch villain, Karunanidhi the hero. But by 2001, perceptions changed. Either public memory is short or the voters angry with the dmk government had chosen to punish him by rallying around a woman who has 12 shocking cases of corruption against her and who was disqualified by the Election Commission from contesting.

All the pre-election opinion polls indicated that corruption was not an issue for the majority of voters in the state. In retrospect, then, the dmk campaign, which focused on the cases against Jayalalitha, didn't impress the electorate. In fact, the aiadmk leader's corruption was also a campaign point in the parliamentary elections three years ago and the assembly elections in 1996. There was nothing new the dmk had to say about the cases in which she had been chargesheeted.

So as the campaign against Jayalalitha gathered momentum, so did the visibility of the aiadmk leader. She was featured in the electronic media and splashed across the front pages of newspapers day after day, appearing before one court after the other, and her partymen spread the word that she was a woman wronged. And almost playing into their hands, the dmk publicity machine got to work reminding the people relentlessly of her wrongdoings. Slowly but surely, the view began to gain ground that the dmk had launched a personal campaign against her.

This worked to Jayalalitha's advantage. Unwittingly, the dmk made her the central figure in the elections. And when she was disqualified from contesting elections, aiadmk workers and leaders projected this as yet another act of vendetta by Karunanidhi. There were very few takers for the dmk plea that it had nothing to do with any action taken by the Election Commission. Undeterred, Jayalalitha declared that no force on earth could fight the will of the people. She would be chief minister, she said with conviction. And she won.

The drama did not end there. The voters, paradoxically, had shown their faith in a leader who did not stand for elections. Now her party unanimously chose her as the chief minister and the governor swore her in swiftly. The big question, of course, is what will Jayalalitha do if she can't get a reprieve from the courts in time to be eligible to contest elections? Lawyers in Delhi even envisage a situation when she might resign, get re-elected as aiadmk leader and be sworn in for another half-year term should she still be debarred from contesting elections after her first six months in office.

This could well happen, admit legal experts. The governor enjoys wide powers of discretion and any gubernatorial decision could hold until stayed or reviewed by a court of law. Lawyers Kapil Sibal and Rajeev Dhawan point out that a similar procedure is followed in the case of ordinances as well as imposition of President's Rule.The life of an ordinance is six months but often governments choose to bypass the legislature by re-promulgating them.

However, legal experts are divided over whether Jayalalitha should have been sworn in in the first place. Constitutional expert Subhash C. Kashyap feels it was wrong to make her chief minister but the governor was perfectly within her rights to exercise her discretion. Dhawan is of the view that Jayalalitha is a "disqualified convicted criminal" but is ambivalent about the wisdom of the governor swearing her in.

Legal wrangles apart, Jayalalitha's landslide win in the Tamil Nadu assembly elections with her alliance bagging 196 seats in a house of 234 members has baffled many. What has made her victory even more emphatic is that the aiadmk managed to secure a majority on its own despite contesting just 140 seats. Gushes the aiadmk presidium chairman, K. Kalimuthu: "Have you ever come across a party which has won 132 seats out of 140 in any part of the world? People have reposed their faith in Amma in an unambiguous manner. The results prove that she is the best political strategist in India, if not in the world."

The poll outcome has been a melancholic moment of realisation for the dmk president and outgoing CM, M. Karunanidhi. His party had to pay the price for aligning with the bjp at the Centre. The 77-year-old veteran, who served the state as the chief minister for four terms and just over 14 years, lost trusted friends like the Tamil Maanila Congress (tmc), the cpi, cpi(m) and the Muslim parties because he was part of the nda alliance at the Centre.

How did Jayalalitha manage to pull off this spectacular victory? Where did the dmk's calculations go wrong? There are some very obvious explanations and some others which are not so obvious. Jayalalitha once again proved that she is adept at forging mega-alliances comprising divergent parties. The secular front led by her, apart from the aiadmk, consisted of the Congress, the tmc, the cpi, the cpi(m), the pmk and the inl. All these parties have a loyal votebank which was transferred to her.

On the other hand, the dmk was losing its allies even in the run-up to the elections. First to walk out of the nda was the pmk. At that stage, the dmk was confident that the entry of the pmk into the aiadmk-led front would cause chaos and confusion and would eventually end up in the creation of the third front—led by the tmc-Congress combine. Karunanidhi thought that the pro-ltte stance of the pmk would force the Congress to abandon the aiadmk front.

This was where Karunanidhi miscalculated. In fact, the Congress-tmc combine used the pmk's entry to bargain for more seats. While Jayalalitha was not willing to part with more than 25 seats to the combine initially, she had to climb down and offered the combine a total of 42 seats. With more seats, the Congress-tmc front gave a silent burial to the third front option.

The second to part ways with the dmk was Vaiko's mdmk. When glitches in seat sharing surfaced between the two parties, Karunanidhi hoped the bjp's national leadership would step in and sort out the differences. Vaiko kept asserting that the nda leadership in general and the bjp leadership in particular was unhappy with Karunanidhi as he was unwilling to participate in the post-Tehelka meetings. "Karunanidhi's love and affection was and is only with the tmc. How can he expect the nda leaders to support him when he refuses to defend them in their hour of crisis?" Vaiko asked.

The war of words led to the parting of ways. The mdmk put up candidates against all the nda candidates expect in 21 seats where the bjp contested. Over 1 lakh posters with Vajpayee and Vaiko were pasted all over the state. All this led to the erosion of the credibility of the nda.

But the proverbial last straw was the PM's campaign. At a rally held at Chennai's Marina Beach, Vajpayee strangely refrained from attacking the aiadmk. His attack was directed at the Congress and the Left, who were bit players. The moment Vajpayee's speech concluded without any adverse comment against Jayalalitha and the aiadmk, the dmk's fate was sealed. What was not missed was the aiadmk's studied silence on the bjp. Neither Jayalalitha nor any of her party members attacked the bjp. People were able to put two and two together and arrived at a conclusion: the dmk was uncomfortable with the bjp.

While the dmk got nothing positive because of being a part of the government at New Delhi, it earned the enormous displeasure of the people affected by the economic policies practiced by the Centre. Says K. Varadarajan, member of the central executive committee of the cpi(m): "The economic crisis was looming large and the dmk's claim of achievements didn't take into account the hardships of the common man. The import policy virtually finished off the small-scale sector, which employs more people than corporate houses. The slump in the procurement prices hit the small farmers badly."

Also, say insiders, the dmk's election promo film showing bridges, flyovers and infotech parks had a negative impact on those living in areas away from where these had come up. The dmk was hit by a double negation—victims of the new economic policies voted against the ruling party and the beneficiaries of the new economic policies didn't come and vote. Says P. Chidambaram, former Union finance minister and the star campaigner for the dmk-led front: "I accept that my message about the performance of the dmk government didn't reach most of the people."

The most important latent reason for the success of the aiadmk-led front was the polarisation of non-Dalits in many segments against the dmk-led front. This time, the dmk included the two major Dalit parties of the state—Puthiya Thamizhagam and Dalit Panthers—in its front. The pro-Dalit tilt seems to have alienated traditional dmk voters from the obc and mbc segments. On the contrary, the transfer of allies' votes was more effective in the aiadmk front, where all the parties—the aiadmk, tmc, pmk and the Congress—reaped a bumper harvest. In the final analysis, it is very clear that Jayalalitha has understood that political dynamics is nothing but a shrewd management of electoral arithmetic.

She topped this with a very strong campaign. She played every possible card to woo the electorate. The mgr legacy came in handy. The promise to work for the poor was played to the hilt. For some strange reason, even before campaigning began, political pundits were predicting an aiadmk win.

So it was a dispirited dmk cadre that hit the campaign trail and they lacked the conviction of a party confident of victory. There was dissension in its ranks over the rise of Karunanidhi's son Stalin. Union commerce minister Murasoli Maran's threat to quit active politics did not help. The mighty dmk machine failed to deliver and Jayalalitha cashed in.