At six, she witnessed the slaughter of her family. In 1984, she relived the trauma. 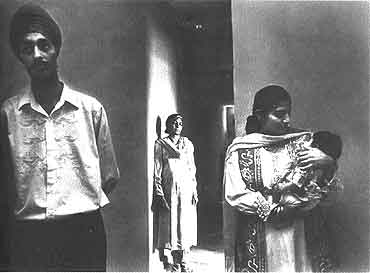 I was six that year. My parents, three brothers, three of us sisters lived at Dheri, 5 km from Rawalpindi where we had brick kilns, farmland. On March 7, '47 a mob of 20 came from neighbouring villages to warn us they were going to attack the village. First our house. Then the rest.

A Muslim friend offered shelter to all 21 of us: grandma, five girls, six boys, my parents, Dad's two brothers with their wives. Also my elder uncle's doctor son who'd come visiting with his wife and three-year-old son from Rawalpindi. Our Muslim host barricaded the door of the room with grainbags. The mob returned next morning--500 people from 15 villages. They leered, yelled that if we came out, ate halal meat, converted to Islam, we'd be spared. Father refused, yelling back we'd prefer to die.

Suddenly a section of our room's kuccha roof caved in. Someone was trying to break in. Someone else fired a shot in the air. Father handed each of us kirpans explaining carefully that if the mob broke the door we should stab ourselves on the left side. My mother, nursing my three-month-old brother, threw herself at father's feet saying, "Save this child. Agree to convert". Father ignored her. When she repeated her entreaty my elder uncle got up, slashed her neck with a kirpan yelling, "Yeh kehna haraam hai" (This is blasphemy). She died instantly. Father put her blood-soaked dupatta on the tip of his sword, rushed out the door half-crazed. People waiting on either side literally skewered him with knives and swords. My eldest uncle who rushed out after him was similarly cut down. The doctor cousin got up to fight next. His wife stopped him, demanding he kill her, all the girls, before he went out. He stabbed her, killed his three-year-old son, stabbed each one of us, I still carry that kirpan scar on my scalp; and rushed out as we collapsed around him. He refused to stab his mother saying, "No dharma tells me to do this". He was lynched in seconds. Last to go out was my octogenarian daadi. She tottered out, frail but resolute, saying, "kaisi ladai ladney aaye ho? Mujhe apne bacchon ko ek boar dekhna hai." (What kind of war is this? Let me at least see my children once.) They ripped out earrings, bangles, gold chain. And as she stood there bleeding, stoned her to death. Before they left they slaughtered the Muslim bhai.

My lone surviving uncle cremated the entire family in the bride kin. Then we walked to Chakri, six miles away, from where we went to Jalandhar to another uncle who raised us, married us off. That three-month-old brother we left behind in a Lahore hospital we found seven long months later. Unrecognisable, like a walking corpse. We recognised him only because of his curly hair, his response to his name "Jeeti".

Do I feel any rage? No. Maahaul bura tha. Log bure nahin the. Woh waqt hi bure the . (The atmosphere was bad. People weren't evil. The times were.) It nearly happened again in '84 after Indira Gandhi died. Bloodthirsty mobs came then too. Neighbours drove them away. My sister Amrit wasn't so lucky. The mob, which included neighbours, burnt her house. One neighbour didn't move a finger while they were being fired at. The other neighbour hid the family in his house till the worst was over. Both were non-Sikhs. Like I always say: good people, like bad people, are the same everywhere.