His incisive work on hunger, child malnutrition and other issues has brought the Other India into intellectual and policy focus 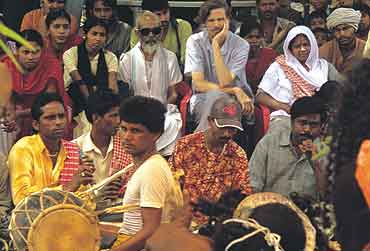 outlookindia.com
-0001-11-30T00:00:00+0553
Jean Dreze would probably hate to be on this list. More than a decade ago, he told Outlook, "I am suspicious of profiles", and that has not changed. The development economist of Belgian extraction (who became an Indian citizen in 2002) is far more comfortable with issues than personalities. And in the nearly three decades that he has been in India, Dreze’s powerful intellect and deep humanism have illuminated a range of them: hunger, child malnutrition, education, rural employment, reservations for women in legislatures, freedom of information.... His peers say that what Dreze uniquely brings to the table is extensive fieldwork—few economists live as much in the country’s villages—combined with outstanding analytical skills. His collaboration with Nobel laureate Amartya Sen has yielded many publications, including the seminal Hunger and Public Action and India: Development and Participation. Dreze is an incisive spokesman for an India which has been largely invisible to the middle class. "I am not aware that India is more self-confident," he said in an interview with Outlook in 2005. "What does national self-confidence mean for someone who is driving a rickshaw or carrying bricks to feed the family? Only a small minority has the luxury of worrying about international perceptions of India." Few westerners choose their countries—they usually stay with what is thrust on them. That Dreze chose India has been a welcome thing.