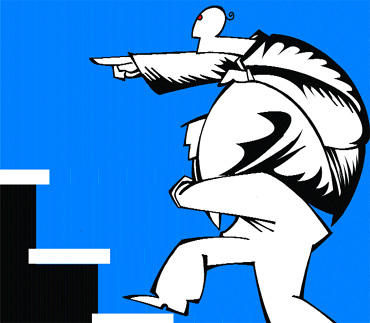 outlookindia.com
-0001-11-30T00:00:00+0553
Let me begin this piece with a dramatic question: what are Brahmins doing in political parties? Let me make it even more dramatic: what are they doing in non-Brahmin, Dalit or Dalit-led parties? If these questions sound startling, it is because of a particular, idealised image of the Brahmin, who is supposed to keep out of temporal politics and devote himself to spiritual pursuits. The Brahmin's engagement in politics requires the dissolution of this supposedly sacred image. Therefore, the presence of Brahmins in politics could be taken to mean that the very definition of Brahmin has undergone a 'progressive' change. It is hence necessary to define afresh who these Brahmins are and to ask what is their location in the power hierarchy of these parties.

I would like to argue that it is the globalising Brahmins who do not find it fascinating to pursue their life plan within the spheres of electoral or party politics. In fact, globalising Brahmins are, in a sense, a ruling category. Then, it would make it all the more interesting to find out the 'calibre index' and not just the mechanical index of educational mobility of Brahmins who are either in political parties or in the state sector. To be fair to Brahmins, they are in parties for different reasons.

It is ironic to argue that there are Brahmins, and that too at the forefront, in most of the Left parties. Am I suggesting that it is the fabled Brahminical cunning that explains their prominence in these parties? It would be unfair to read it in such narrow terms. In fact, the project of modernity makes this prominence almost natural and hence beyond any objection. Thus, Brahmins would argue that it is their discursive power to produce convincing and conquering arguments and also the moral capacity to remain committed to the common cause that can explain this prominence.

According to this view, the question of prominence is a non-issue because argument and moral calibre have no caste. However, the modernity argument flies in the face of social justice, as the gap between the Brahmin and the non-Brahmin tends to remain endemic to such a party. The Brahmins in socialist parties find themselves in the forefront because they thought Communists are a difficult intellectual and political option, and secondly, they think that for genuine 'secularism', they cannot rely on the Congress. The Congress, particularly the Nehruvian Congress, used modernity to justify the Brahmin prominence both in the party as well as the government. The non-Brahmins within the party have not been able to replace the Brahmins from the core position within the party as well as party-led state power.

The demographic dimension of electoral democracy has forced a dialogue on the right-wing parties. It is interesting to note that the political compulsion to produce a Hindu majority has forced the leading right-wing parties to push to the front, at least symbolically, some leaders from Dalit, OBC and minority sections. The Brahmins have selectively chosen to work in such parties as a back-up file. This adjustment is aimed at maintaining the hold in case the main 'file' gets corrupted. Interestingly, both the 'Mandalised' forefront as well as Brahminical core are bound less by the modernity frame and more by pre-modern dreams.

Dalit parties are either devoid of any back-up file or they invite Brahmins to occupy the front. In Indian electoral politics, Brahmin prominence in Dalit politics has been commended even by the Dalits. This looks fascinating in the context in which any association with the Brahmin was considered taboo by the non-Brahmin and some Dalit parties as well. Ambedkar's Independent Labour Party of the late 1930s and the Dalit Panthers of the early 1970s could be considered an exception to this general mood that existed in the Dalit political imagination. Inclusion of Brahmins in the party was influenced more by principles than by pragmatic considerations.

The dominance of pragmatism not only rehabilitates Brahmins within the political imagination of Uttar Pradesh Dalits but also has a snowballing impact in other regions. It is now necessary to raise an important question: why do a majority of Dalits from the north support this open association, if not domination, of Brahmins with Bahujan politics? This could be because this overlap helps in gaining the hold of power, and secondly, in the cultural realm, the affirmation, or even celebration, of the image of Dalit leaders by Brahmins is viewed by the common Dalit as a great gain.

But the Dalit imagination often fails to appreciate a paradox: while the Brahmins might celebrate and even worship the pratima (image) of Dalit icons, starting from Ambedkar, but at the same time it also tramples under their feet the pratibha (genius) of these icons.

(Prof Gopal Guru is with the Centre for Political Studies at Jawaharlal Nehru University, New Delhi.)