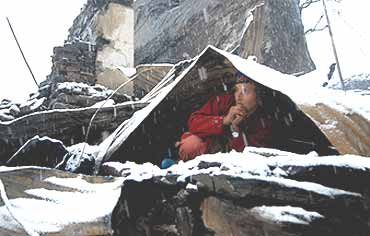 It's All Greek Here

At first sight, and after an arduous three-hour trek, Malana and its quaint snow-covered houses seem like a beautiful portrait in black and white. But venture a little deeper into this Himachal hamlet and it's anything but pictureseque. The smell of burnt wood hangs heavy in the air; remains of gutted houses smoulder on, much like funeral pyres, and the many families rendered homeless huddle around, praying silently for the cruel snowstorm to abate. Almost half of this curious, secretive and isolated village got wiped out in a raging fire in the early morning of January 5. Some 100 houses and 200 families were affected in an inferno that the villagers call a curse of the gods, but which was more likely caused by a stray tinder that set stored fodder afire. What villager Ram Krishna remembers is that "within five hours, everything was gone". Bhadri Devi nearby even now is trying to extinguish the last of the smouldering embers that was once her house. The weather didn't help either. "It was absolutely clear when the place caught fire," says Kullu deputy commissioner Abhishek Jain. "In fact, it was very windy which only stoked it further." And when relief work began, it started snowing, hampering the process. 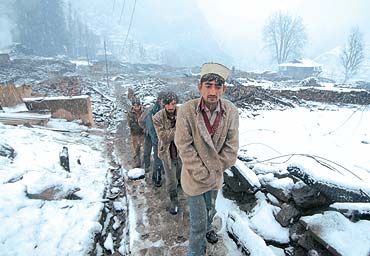 Fire and ice: A shelterless Malana family trudges through the snow

But Malana's story doesn't end with destruction, homelessness, loss of property, belongings, crops and livestock alone. Alongside, an entire history, heritage and culture that have made Malana unique for centuries also face the danger of being obliterated.

Located at about 12,000 feet near the town of Jari, Malana has been a veritable Forbidden Kingdom for eons. Its light-eyed residents claim descent from the Greeks, and steadfastly believe their ancestors were Alexander's soldiers who struck roots here after invading India in 326 BC. The villagers speak a distinctive Kanashi language (resembling the one spoken in Lahaul), have stayed aloof from the locals, consider themselves superior and marry among their own to preserve the purity of their race. They have also remained independent of the local administration and government, instead having their own panchayat system in place, and boasting of themselves as the world's oldest democracy. Their well-organised parliamentary system is believed to be guided by their deity, Jamlu Devta (a rustic avatar of Rishi Jamdagni who is said to have chosen Malana for meditation), who also presides over a primitive system of justice.

Clearly, Malana is an intriguing mix of history, myth and legend. This culturally rich village had four ancient temples, the most famous being of Jamlu Devta. It was this temple that housed the village's priceless artefacts, heirlooms, jewels, gold and antique metalcraft. It had also been the storehouse for crops and grain. Deer heads and animal horns adorned its walls while it was famous for its unique wooden architecture in the Kathkuni style, marked by intricate woodwork and etchings of horses, elephants and armoured warriors (which decorate the houses as well). The temple treasury is also known to have had a unique gold statue of Emperor Akbar as well as an elephant statue gifted by him. According to local lore, Mughal soldiers took away two Malana gold coins from a sadhu, which were deposited in Akbar's treasury. However, the Emperor returned the coins with the statue after Rishi Jamdagni came to him in his dreams. All that is left now of this temple are ashes and embers. "It is difficult to estimate the archival loss. The temple was very rich but no record of the belongings was ever maintained," says deputy commissioner Jain. Rumour, though, has it that the secretive Malanis managed to save the treasury but are not willing to come clear on it. 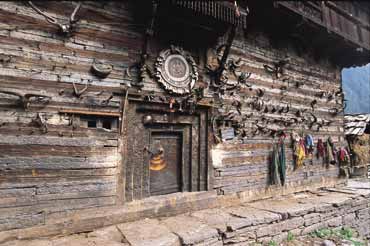 Treasure lost: The historic Jamlu temple, gutted in the fire

Malana has been battling modernity for a while, trying to keep the outside world at bay. Will the fire finally end its isolation and bring it more in tune with modern times? Perhaps. Truth be told, Malana hasn't exactly been stranger to outside influence. The hippies have long frequented Malana for its most famous product—high quality hashish called Malana Cream. Malanis are farmers, rear cattle for livelihood and also collect and trade in medicinal herbs. But the cannabis traders and Israeli backpacker tourists have denuded the Malani of his innocence, even if they have left him cash rich by pumping in money from the illegal narcotics trade. Though the commerce has come under scrutiny and is nowadays heavily curtailed by the Narcotics Control Bureau's efforts, it continues to thrive in a few pockets. In fact, the fire is believed to have destroyed the store of hash harvested and rolled in December, but rumour again has it that the villagers have managed to save the stock.

There are other civilisational intrusions as well, all-too-visible on the trek upward—packets of Lay's chips littered all around, a lone rock on which one Atul has inscribed his love for another Jagriti in English, Airtel signals that are as clear as the mountain air, and an ugly guesthouse which promises to serve pancakes and waffles. There are power projects and dams too in the vicinity, which some call eyesores, scars on the environment, denuding the forest cover. But they have also made life easier for the Malanis. With the projects have come electricity, a school and a pharmacy to Malana. "The company provided Rs 2 crore for local area development," says Amit Kumar, a contractor with Everest Power Private Limited.

Malana still has a long way to go though before it can physically connect with its surroundings. A villager has to trek several hours to Jari if he wants to see a doctor or buy fodder. Why, it took the firefighters hours just to get the equipment up to bring the fire under control. So far, there is a concrete road till the base of Malana, which links it to towns like Jari, Bhuntar and Kullu. From here, the trek is about three hours, a considerable improvement on the 5-6 hours it used to take earlier to trek all the way from Jari, or the infinitely worse 5-6 day trek from Naggar through the Chandrakhani pass before that. There is also a proposal to link Malana up through the Prime Minister's Gram Sadak Yojana, a scheme that would also bring sanitation and some much-needed development to the village. But it would also require the villagers to let go of some of their private land.

Before that, though, Malana will have to let go of its cultural baggage. Subtle transformations are afoot already. Once upon a time Malana could turn the caste tables on any self-respecting Brahmin—the Malanis believed themselves to be descendants not just of Greeks but also of gods, and treated Brahmins like untouchables! In the village, outsiders were allowed to walk only on certain routes, couldn't touch certain areas, couldn't wear leather or consume liquor, and had to undergo various purification rites. The fine for breaking rules, touching houses and temples could be as much as Rs 1,000.

On the way up to Malana, you might think it still hasn't changed—many villagers still recoil from us lest our touch or breath defile them. But up in the village itself, wisened perhaps by the disaster, defences are down. Huddled together around the fire with us, Malanis readily offer us tea and tales, showing us albums of their traditions, rituals and festivals—including one in which they take Emperor Akbar's statue out in a procession, the women all dressed up in burqa-like costumes. 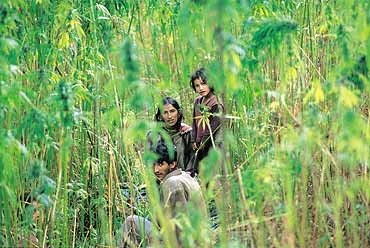 Around this seeming glow of self-contentment now lurks despair. Largely illiterate despite the prosperity ganja has brought him, the Malani still believes the fire is the wrath of Jamlu come upon them. "Jamlu devta is angry," he tells you, in all good faith. But whether the devta is coming to his rescue or not, other agencies have stepped in. The power projects personnel provided manpower, aid and equipment after the disaster. The Malana Power Company too extended Rs 25 lakh relief to villagers.

The government is giving each family Rs 65,000, of which Rs 10,000 per family has already been distributed. Some 500 blankets and 50 tents were provided on the first day itself to shelter the homeless. The Himachal government is also planning to take help from architects to rebuild the gutted houses in the traditional way. "But given the ban on using wood, we'll provide them confiscated and seized wood even though it may not be enough—100 per cent restoration will not be possible," says Jain. The government is also planning to earmark Rs 10 lakh for the restoration of the Jamlu temple in the original architecture style, using the help of both experts and the Malanis.

Will Malana be the same again? The fire could well be a blessing or a curse, depending on which way you look at it. Will it force the Malani to give up his independent spirit, and step out of his self-contained world? Perhaps, but not before Lord Jamlu visits him in his dreams and tells him in no uncertain terms—let the world in.

'I'm Not Passionate About Cars, It's Transportation'