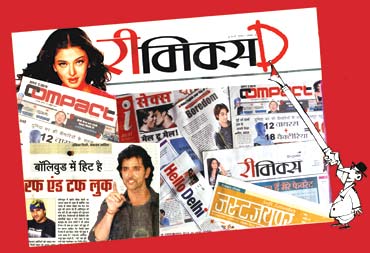 Don't brush aside the urchin who thrusts i next into your hand at Kanpur railway station or Meerut bus-stand. Even if you have no aptitude for reading Devanagari and no taste for news with a strong local flavour, i next is well worth its Re 1 price—if only to see how far the Hindi press has got in its heady embrace of English.

i next, a compact-sized daily from Jagran Prakashan Limited (which publishes market leader Dainik Jagaran), is fast invading Uttar Pradesh's cities and towns. Starting out in Kanpur and Lucknow a few months ago, it recently landed in Meerut, and is heading for Agra and Varanasi. As its name suggests, it is wooing aspirational readers aged 18 to 35 with an unabashedly bilingual pitch. The marketing boys have scattered a fistful of English words, in the Roman script, across its pages. Page slugs—from 'iview', for editorial comment, to 'icandy', over a new picture, every day, of a bikini-clad woman—English bylines, datelines, listings, phrases, and even headlines, especially for descriptions of modular kitchens, cutlery, electronic gadgetry, career options and college festivals. Even what looks like Hindi is quite often English. Screams the Devanagari headline of a front page lead story: "Sex, Male to Male".

Explaining why he thinks English words sometimes tell the story better, Alok Sanwal, project head for i next, says "Jeevan shaili is not the same as lifestyle, saundarya is not beauty—there is a difference of connotation; it's classic vs contemporary. Then, some words read a lot better in Roman than Devanagari, that's why we use them."

i next is one of at least four new papers selling themselves with English names in the ambitious, rapidly expanding and cut-throat world of Hindi newspapers. Just last month, the Amar Ujala group launched Compact in Kanpur, similarly priced and with similar ambitions. In Jaipur, the leading Rajasthan Patrika group's new broadsheet is called Daily News, its evening paper, sold in Jaipur and Indore, News Today.

In a far more restrained way than i next, the two other groups are also tapping into the appeal of English—and all three groups claim success for these fledgling brands, looking to get to the crevices in the market their mother brands don't reach, despite their mammoth readerships. Sanwal of i next claims it sells 75,000 copies in Kanpur, 57,000 in Lucknow and 27,000 in Meerut, and has overtaken Hindustan in Meerut by selling 27,000 copies. Shashi Shekhar, group editor, Amar Ujala, claims Compact's sales in Kanpur have crossed 60,000, and Patrika's bosses claim a circulation of over a lakh for Daily News.

Explaining the phenomenon, Ajay Upadhyaya, former editor of Hindustan says, "They are targeting a reader who, even if not at home in English, wants to get into that mode, for joining a decent educational institution, for social status, cultural transformation, for employment and business."

They are not the only ones doing it.

All this flirtation with English by a once-prissy Hindi press didn't come overnight. It was pioneered in the '90s by the Times of India group encouraging the march of English into the venerable Navbharat Times. Partly, it was about loosening linguistic corsets to bring newspaper Hindi closer to an aam bol-chaal ki bhasha (common man's language) increasingly peppered with English expressions, new technical terms and economic jargon. But as the jaunty English title of NBT's city supplement, Hello Delhi, indicated, it wasn't just about plainspeaking—the in-house marketing gurus had cottoned on early to benefits of tapping the aspirational segments, be it students, glamour-seeking, beauty parlour-visiting housewives in small towns, or young businessmen, to get into the cultural, social and economic space occupied by English.

What looked like an offbeat experiment then is now a mantra, from metro editions to those in the regional nooks, crannies and crevices of the cow belt. The pugmarks of English are all over Hindi newspapers, in both Roman and Devanagari. Papers in other languages have also loosened up, and of course, English papers are full of the khichdi English of streets, ads, radio DJs and TV studios. Still, what's happening in Hindi newspapers is quite extraordinary.

Other leading Hindi dailies like Dainik Jagaran, Dainik Bhaskar, Amar Ujala and Rajasthan Patrika are less experimental, at least in their main pages. Says Shekhar of Amar Ujala: "The old opposition to English has gone, we don't consider it untouchable, we don't ignore it if it adds fluency, but we want to keep as close to Hindi as possible." But that's not at all the case when it comes to the plethora of advertisement-driven teen, kiddie, lifestyle and entertainment supplements put out by Ujala and the other groups. With titles like "Hi Junior", "Just Jaipur", "Teen World", articles explaining English usages ("Make English your cup of tea"), headlines like "Fun with Funk" they show a headlong rush towards English. Says Sanwal: "There is no absolute Hindi paper anymore, no editor can deny it."

The editor of Hindustan, Mrinal Pande, is not about to deny it. A passionate advocate of the inflow of English into Hindi papers, she says it demonstrates the self-confidence of Hindi. "Seventy per cent of our readers are below the age of 35, they are moving very fast, crossing linguistic boundaries," she says. The hunger for English, the fact that it signifies that you "have socially arrived", explains why experimentation is acceptable to readers, adds Pande. Is it going overboard? "Even if it is," says Pande, "it is self-correcting." That is true, to some extent—from Navbharat Times to i next, the proponents of English-meets-Hindi have tweaked their mix at times.

However, not everybody is as sanguine and upbeat about the new trend as Pande. It's not a black-and-white polarisation, like in orchestrated TV studio fights, with "purists" and "innovators" ranged against each other. Critics of the flood of English into Hindi papers, like Rajendra Yadav, editor of Hans, or Neelabh Mishra, associate editor at Outlook's sister publication, Outlook Saptahik, are not guardians of linguistic puritanism. However, asserts Mishra, the Hinglish of the Hindi papers is often a dumbing-down, an unthinking, even lazy use of English, a loss of creativity rather than an exercise of it. "In focusing on the new English-heavy business reporting, we're forgetting how exciting and creative Hindi reporting can be, with expressions like chana ludka and chaandi uchchli. What's wrong with saying parmanu samjhauta rather than nuclear deal, most of our readers will understand that term much better?" Adds Yadav: "It's a bastard language that is being created, a succumbing to the dominance of English." Are the proponents of Hinglish as the new Hindi listening? Probably not.