'I've Read The CMP And Liked It'

Development expert Jeffrey Sachs, 50, director of the Earth Institute at Columbia University as well as of the UNDP-supported Millennium Project and special advisor to UN secretary-general Kofi Annan on the millennium development goals, was in Delhi 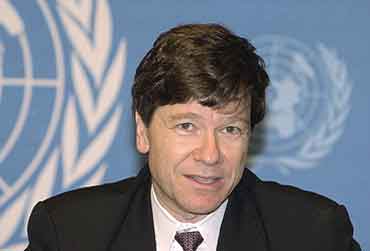 outlookindia.com
-0001-11-30T00:00:00+0553
What do you think of the new government?
I’m delighted. Manmohan Singh is the best thing to have happened to India’s reforms and I’m glad he’s here now. I’m primarily here to meet friends in the government.

Are you happy that there is a Left-supported government?
If you mean the common minimum programme, I’ve read it and I’ve liked it a lot. I’m impressed with the goals and objectives of the programme. And particularly happy that there is a plan to raise the health and education budgets to six per cent and three per cent respectively of GDP.

Isn’t delivery rather than money the problem?
Delivery, of course. But money is also a problem. Ever since independence, India has traditionally neglected education and health. A six per cent outlay is an absolute must for these sectors. It’s not a concession to the Left. Most poor countries spend 4-5 per cent on health.

But the government doesn’t have money...
That is a problem. The budget (fiscal) deficit is a concern. But you have to look at innovative ways. Also, I think the time is ripe for India to ask for a doubling or more of its share of IDA (World Bank aid).

Is there anything in the CMP you don’t like?
The labour issues. These are what we call the Third Rail (of the metro) issues, very dangerous. India’s labour laws are very restrictive and obstruct employment generation, they must be rephrased.

Are you hopeful about continued reforms?
Don’t forget people’s aspirations and expectations have risen and that’s due to reforms. In such a vast and complex country, reforms cannot be straightforward. The challenge is to have sustainable development while becoming integrated with the global markets.