'I've Always Had Moles In AIR And DD'

Extracts from the autobiography of the doyenne — often the stormy petrel — of Indian journalism. 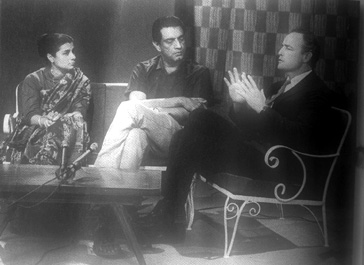 outlookindia.com
-0001-11-30T00:00:00+0553
Amita, No Holds Barred
By Amita Malik
HarperCollins Rs 295, Pages: 377
Amita Malik has been the doyenne — often the stormy petrel — of Indian journalism for 40 years. Her autobiography, Amita, No Holds Barred, is a personal story, but rich with anecdotes of famous people and the vagaries of a nascent media; it is also an important history of the media in India. Living the garret life in Bombay in the '50s, Amita and her husband Iqbal Malik met people like Guru Dutt, Zohra and Uzra Mumtaz, M. F Husain and the Rushdies while they were still struggling. Later working with AIR , Doordarshan and as a freelance journalist, Amita famously interviewed legendary giants like Elia Kazan, Marlon Brando and Satyajit Ray. Once as a 4-year-old, out of a vague sense of wrong, Amita threw a jar of cream at a servant who had tried to paw her. "I'll tell your father," roared he. "I'll tell my father too," retorted she. They left it at that. But this quality of spirited self-defence has served Amita well through many skirmishes, both personal and professional. These extracts showcase some, like her run-in with friend and colleague, BBC man, Mark Tully...

Ihave known Mark from his earliest days in India, when he, together with Cecile Crawley, also from London, were deputies to Mark Dodd and they had a modest office in Gole Market, a crowded bazaar area, very far removed from Mark's later elegant office on the top floor of his house at Nizamuddin, or its later professional premises on Rafi Marg. I knew his delightful family during its long sojourn at Jorbagh, facing Safdarjung's tomb....

Certainly everything was perfect in our personal and professional relationship by the time Mark Tully took over from Mark Dodd.... Then came the visit of the BBC Director- General Alistair Milne to Delhi. With it coincided the preview of Mark Tully's very first TV documentary on India. It was held at the India International Centre. And what I noticed at the time was that no matter whom Mark interviewed in the film, including army jawans, he asked one stock question: What did they think of caste? A legitimate question, no doubt, but the way it took precedence over other issues struck me as unnecessary. Doordarshan rang me up the next day, and asked if I'd like to interview the BBC DG. I said I'd be delighted.... When I entered the headquarters of DD on Parliament Street for the interview, and as we proceeded to the studios, I noticed Mark Tully had entered the control booth and he sat there throughout. I asked the DG an extremely wide range of questions, and he answered them with wit, authority and tact, most of the questions being about the BBC and the British media in India. Then I asked a question which had been bothering me since the day before: 'Tell me, DG, why must the Western media always stress the ugly side of India? Even Mark Tully (and I meant this to be a compliment) could not resist emphasising a cliche like caste, although he's been long enough in India, seen modern India and, indeed, covered in it very sympathetically in his despatches. ' The DG answered suavely, diplomatically and was as relaxed as when he answered all the other questions, without attaching too much importance to it.

We finished what was a very lively interview but as we came out of the studios, I found Mark standing there belligerently and very red in the face: 'Why did you say that about my programme? ' he asked angrily, even as the two DGs, of the BBC and DD, stood by in embarrassed silence, 'You must get it cut out of the programme, ' said Mark. I was absolutely astounded. ‘Well Mark, ’ I replied, ‘you were in the booth and had a preview only out of courtesy. As for the question, I’ve heard much more provocative questions asked of Indians on the BBC. As for cutting it out, you are professional enough to know that it’s the producer and organisation which decides. In any case, please don’t shout at me in the corridor like this. If you want to have a civilised discussion about it, drop in at the house tomorrow, and discuss it over a glass of beer.’ Saying this, I walked down to my car, wondering what had come over Mark. 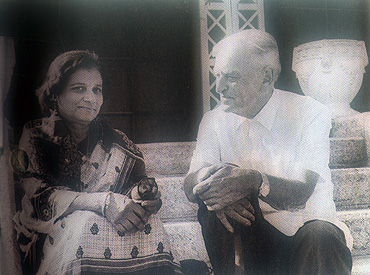 As it happened, next morning I came down with high fever and the doctor thought it was malaria. As I was lying in bed, with my sister Namita applying eau-de-cologne to my forehead, the telephone rang sharply. ‘Someone called Mark Tully,’ said my sister, ‘he insists on talking to you although I’ve told him you have fever.’ It was, indeed, Mark. And without even a greeting, he said in the same angry tones: ‘Well, Amita are you going to cut out what you said about me in the interview or not?’

‘I’ve already told you Mark, ’ I said, ‘that if you want any changes in the programme, you have to speak to the producer and not me. I am in bed with fever, and don’t ever shout at me. I repeat, if you want a friendly discussion, drop in for beer when I have recovered. ’ I then rang off, with Mark still spluttering at the other end.

And then a very strange thing happened. The whole day, at intervals DD had made announcements that my interview with the DG of the BBC would be telecast that evening at a particular time. But when the time came, there was neither the interview nor any apology or reference to it. I’ve always had moles in AIR and DD, highly professional youngsters with professional principles which rapidly get crushed. And they know that they have an ally in me. One of them told me that what had happened was this: The then vacillating and very timid DG of Doordarshan had caved in under the sort of pressure from Tully which I had resisted. And the telecast had been cancelled under the plea that it transgressed a clause of the Doordarshan Code by which ‘hostile statements could not be made against friendly foreign countries. ’

This was, indeed, the absolute limit. And I lost no time in taking counter measures. I immediately sat down and wrote a letter to Indira Gandhi, who was then PM. So far, in my columns, I had opposed her rather touchy views on the BBC. But this time, I was with her. After giving a ball by ball account of my exchanges with Tully following his courtesy preview of my interview with his DG, and the DG Doordarshan’s alleged quoting of his Bible to ban my telecast, I asked the PM a simple question: ‘Tell me PM, who is running Doordarshan, the Government of India or the BBC?’ I then drove down to South Block in my shaky state, as malaria is a very weakening disease, and left the letter for the PM at the reception desk around 11 am. I did not get a reply, but, believe it or not, the full interview, complete with the reference to Mark Tully, was telecast that very evening. Freedom of speech, and much more, national honour had been vindicated.... After that, I was dropped from BBC parties for some time. But Mark is a highly professional as well as warm human being. We both mellowed after that. When my husband died, I requested Mark to say a few words at his funeral, which he did with grace and feeling. We’ve been good friends since, and when he was associated with an FM channel in Calcutta he did a long interview with me on international film festivals in India and we both enjoyed it. So, if I have recounted this incident in detail it is not to score any personal points off Mark, who remains a valued friend and colleague but to illustrate the kind of attitude which even the most able and friendly foreign correspondents can sometimes adopt in India, where colonial hangovers still die very hard...

By the time I came back to India, and went for my first Indian programme to Dordarshan, I’d already done a tremendous amount of radio and TV in Canada and become thoroughly professional. The CBC , for whom I did the major part of my programmes, is one of the best in the world. There were also several private channels which booked me and I earned good money. The DD Studios were in Akashvani Bhavan, next to Broadcasting House on Parliament Street. The young woman producer was extremely arrogant, typical in some ways. They were all halfbaked, full of themselves and behaved worse than the prima donna newscasters of today. This one took one look at me and sternly ordered: ‘Take off your sari. ’ ‘Really, ’ I said in an instant reflex, ‘Your demand would’ve been much more exciting if you were a man, but why should I take off my sari?’ ‘It’s not suitable for television, ’ she replied. I instantly asked: ‘For colour TV or black and white? ’ That flummoxed her a bit because then and for years afterwards, dear old DD had only black and white. Before she could think up an answer, I said: ‘I’ve used this sari for colour on the BBC and CBC and for black and white in Hungary and Czechoslovakia and I’m afraid I’m not going to take it off." Then she said: "Why don’t you do something about your hair." I then had very beautiful long hair and wore it in a pretty Bengali-style chignon with flowers. ‘What do you want me to do, cut it off? ’ I asked. ‘If you don’t like my hairstyle and sari you can cancel the programme, otherwise I will. ’

Anyway, I did the recording such as it was, and that was my stormy initiation into Doordarshan and its strange ways.